So this thing was deep in the jungle, crawling around picking insects out of the dirt.  It’s back was sore and its neck was hurting too.  It looked high up into the massive trees, which for all it knew was the color of the sky.  It leaped onto a vine, and scaled out onto a thick branch, looking down.  It felt the pain in it’s back again, and rubbed it neck with its newly abductable hands.  It stretched, heard some joints crack, and then lifted itself off its belly, standing upright for the first time . . .

This is, more or less, a true story.  The first known ancestor of humanity, Australopithecus (translated as ‘Southern Ape’) roamed the jungles of Tanzania all the way back then, less a tribe than a shrewdness of animals, roaming around and sometimes devouring each other.  And yet they were smarter than the rest.  There was a germ of something we call ‘reason.’  They could figure out how to get things they believed that they needed.  They had no religion or politics to get in the way of their goals.  Some might call this paradise if there were not larger and more powerful monsters also in the jungle who could claim them in the battle to control the world.

It was here in Tanzania (as well as other African countries, although back then there was also no such thing as national borders) that the slow process of human evolution unfolded.  More than four million years later the genus homo-erectus rose with a deeper understanding of what it took to survive in a dangerous world.

The first tools were rocks, the clever homo erectus using them to build, sharpening them to cut, rubbing them together to make fire, or simply using one as a weapon to bash another one’s skull in, grunting a song of triumph over the mutilated corpse.

But is this Tanzania?  Is there even such a thing as a nation, going so far back in time, reflecting on the walls we have placed between us in the modern world?  It is something worth considering, listening to the nervous politics of fear that have consumed all of us over the past hundred or more years.

This is Tanzania today:

Considered the greatest country to experience a safari, with the possibility of sighting several of the dwindling, prehistoric animals remaining on earth, such as our last dinosaur, the rhinoceros.

But what is the human history of this ancient land, of this place that may very well have housed the Garden of Eden (if such a place existed)?  Who are the people who populate this land, and what defines their culture?

There are well over fifty million people who live in this very modern nation in eastern Africa.  It is bordered by Kenya, Rwanda, Uganda, Zambia, Malawi, Burundi, Mozambique, and the Democratic Republic of the Congo.  It also has beaches to the extreme east along the Indian Ocean.

Mount Kilimanjaro, the highest peak in all of Africa, and one of the great locations for adventurous climbers, (as well as an obsession of Ernest Hemingway’s), peers down at the world.

But the people, the people of Tanzania are an extremely diverse group.  This is a list of the different ethnic groups that make up the population:

(Pant, pant . . .) If you are still with me I do not blame you for racing through the list, ultimately scrolling down before you absorb every name.  I just listed 163 distinct ethnic groups all living together in one nation.  I want you to consider this for a moment–seriously consider the consequences of such instinctive differences between 50,000,000 plus people.  How would your nation fare?

You might notice that many of these groups have very similar names.  Considering the deeply ancient nature of humanity in this land, we can consider each one of these different people as members of tribes, the near exact spelling of the names likely representing a split hundreds of thousands of years ago.  Two of the ethnicities, the Hutu and the Tutsi, you may recognize from the fearful genocide in Rwanda of 1994:

But with so many different groups of people, tensions are bound to flair, and even in Tanzania scapegoats have been found to butcher, rape and murder. 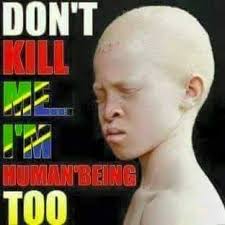 There is a rather large tribe of albinos in Tanzania, and innate racial prejudice and a deep-rooted (and somewhat justifiable) hatred of the white man has caused hatred to explode.

Of course these are not white people, only those with a different genetic code of what some would call ‘abnormality,’ which causes them to stand out in a crowd of people.  And those who are recognized for their differences are often targeted by people seeking anything to blame for their frustrations.  Additionally, for some a solution to all their problems, it is believed by some that Albinos exist as a result of black magic, and that their limbs have magical properties that allow wishes to come true.  There is a subtle strain of self-hatred in this, reflecting on the darkness of their own skin and, for those seeking to pillage the albino community, perhaps a desire to renounce their own racial identity.

But despite this (and every nation has its darkness and horror, as this series has been teaching me), Tanzania also has a positive and heroic history.  During World War II, for example, more than 100,000 people from this nation volunteered to fight with the Allies against Fascist Italy, Vichy France, and the Empire of Japan.  Tanzania was also among the most important sources of food during the war, growing crops in the way that America was building weapons, making the nation very rich for a time (until international bankers imposed taxes and tariffs so extreme that Tanzania sank into poverty.)  Even during the Great Depression, when Tanzania was one of the few nations left without too many problems, they generously provided food around the world to the starving people suffering through summer droughts.

The British, of course, as with nearly every nation in the world, had some claim to Tanzania.  Their colonial rule came to an end in 1961.  Meanwhile in nearby Zanzibar the British left in 1963, ceding the country to Arab rule.  Shortly thereafter a revolution erupted, insurgents armed with spears and machetes attacking numerous police stations filled with unprepared new recruits that replaced the experienced officers who were part of the attack.  Here is the result:

It was a mass killing of Arabs by an increasingly radicalized and nationalistic faction demanding entry and reconciliation with Tanzania.  As a matter of fact, Tanzania wasn’t known by that name until 1964 when the merger with Zanzibar was completed.  They used to be called Tanganyika.  This new name was a compound of the first three letters of each nation, followed by the ‘i’ and ‘a,’ which repeated the only vowels in either.  In native Swahili Tanzania is translated as “sail in the wilderness,” both an appropriate and, upon further consideration, a deeply troubling name.

As with so many other nations within this sphere, socialism came and conquered the burgeoning, newly independent government, nationalizing the factories and imposing mandatory work requirements on the people.  Tanzania’s alliance was with Communist China more so than the Soviet Union, which made business a far more important thing to the future and destiny.

In the 1980s Tanzania abandoned most of it’s socialist policies, their economy declining.  They blamed the Chinese, perhaps not entirely fairly.  The new social reforms repaired the broken system, greatly helped by loans from the International Monetary Fund.

Today Tanzania suffers once more from economic struggles and increasing cultural rage.  And while the nation remains socially stable, there are some burning issues that threaten to overtake the peace.  The current president, John “The Bulldozer” Magufuli, 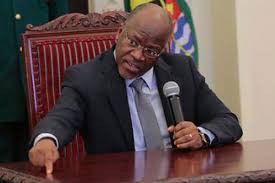 is a stubborn man with some pretty radical views.  And while he has vastly reduced government spending (even cutting his own salary by nearly seventy-five percent), as well as focused much of the nation’s resources on developing and improving infrastructure, Magufuli has some extremely harsh prejudices.

John Mugufuli has a penchant for banning things in Tanzania.  He banned hookah smoking, claiming that this practice was harmful to children.  Violating the law could land you in prison.  But the harshest bias Mugufuli has imposed upon his nation resembles, with only slightly less cruelty, the recent policy changes in nearby Burundi, outlawing male/male homosexuality.  This is punishable by thirty years to life in prison (it is being stoned to death in Burundi, like something out of 17th century witch trials).  World AIDS day conferences were canceled in the nation, which is ravaged with the disease, and he outlawed AIDS medication.  He has also cut off the supply of condoms to the gay community, stating “Let them kill themselves by their sins.”

Mugufuli has threatened to imprison and deport anyone campaigning for gay rights, and refusing prosecution for victims of anti-homosexual violence, making such crimes legal.  And here is another dictate, stated in a speech by the commissioner of the capital city Dar es Salaam, Paul Makonda:

Religion in Tanzania is slightly less important to the overall social structure of the country than in many other nearby places, although it still plays an important role in people’s lives.  Those that came from Zanzibar are almost exclusively Muslim, while the overall majority of the nation is Catholic (Mugufuli, claiming to be a devout Catholic, was condemned by the Roman church and excommunicated.)  There are still several who practice indigenous religions from the distant past, including voodoo and varying forms of witchcraft.  These people are also condemned, sometimes arrested without explanation.

If there is terrorism within Tanzania it hardly has a religious face, and is more committed by domestic radicals and militias, robbing banks and blowing up police stations.  This is rare, and crime is relatively low.  It is, today, a rare nation of anxious peace, committed to family and the future, but with a dark cloud forming over the divisions of society and the lost unity of the modern world.