Do not mistake Cameroon for some soothing pastoral nation like some other places in Central Africa (those nations minus the dictators and military coups).  No, this nation is filled with bursting cities, economic speculation, and people who, for the most part, have no interest in their ancient tribal separatism.  Look:

Of course, these images are used to depict the nation I wish to explore.  I could just as easily have promoted the land as quaint and primitively tribal:

But, if we were to choose, we could make this contrast with every nation.  The following two images are both the modern United States:

So I see Cameroon as a burgeoning part of today, whether even the residents of that nation agree or disagree.

The history of this land, as with everywhere on Africa, is very old.  The first known civilization living in Cameroon goes back towards the end of the Neolithic era, more than 12,000 years ago.  And yet this history is vague, based exclusively on fossil remains.  It was not until about 8,000 years later that the actual people began to be known.

One of the first groups of people to conquer the land are those who eventually came to be known as pygmies, a race of dwarfs who sank into the center of the nation (as well as parts of nearby Congo and Nigeria), living in the natural beauty of the provisional rain forests.

About the same time that Christ was being crucified over in Asia, a vast migration spread throughout sub-Saharan Africa, an organized culture based upon a unified language rising up out of the jungles.  This has come to be known as the Bantu expansion.  The people came from the South and East and West of Africa, chattering with one another as they met strangers from different cultures, organizing their words into similar sounding meanings, and learning the idea of communal living with strangers of slightly different ethnic backgrounds.  Many nations were formed at this time (although not yet officially; it would take the French, Portuguese and British to draw boundaries), Gabon and Angola along with the Congo and Nigeria and Niger and Chad.  And the one thing that kept most of them out of war was language, giving us an idea of just how important common understanding is to the growth of civilization.

But, of course, by 500 AD many new twists invaded the culture, not the least of which were Christian missionaries attempting to end the reign of tribal religions.

which gave way to

and then, as slavery started becoming an option,

Cameroon got its name shortly after the Portuguese arrived in 1472.  Mostly disregarding the natives, what they discovered were hordes of creatures had been considered rare “ghost shrimp” in the Wouri River.  They named this river Rio dos Camarões, which translates into ‘shrimp river.’  Thus this is the meaning of the nation, at least as the conquerors saw it.

After this, the missionaries had their way with the peaceful people, barking and beating them into submission.  They were enslaved in everything but name, forced to serve the priests and bishops, often sexually.  They were abused and taught that this was the meaning of the faith: Christ died for your sins so you cannot complain about any living pain.  These missionaries were the self-flagellating sort, eventually developing into a sort of sacred S & M culture, where abuse became mixed up with pleasure.  And so Cameroon evolved this way.

Of course the Muslims attempted to move in, and had some modest success, but the warlike nature of the Christians in Cameroon repelled much of this invasion.  The nation to this day remains predominantly Catholic, with other sects of Christianity taking up the bulk.  Islam is a distant third, and they are treated with a similar contempt as they were 500 years earlier.  In our radicalized age, this has led to problems we will get to shortly.

By the 1800s the world had changed enough to make the people themselves the highest yield crop in all of Cameroon.  There was a newly declared jihad too, with attempted genocide of all non-Muslims, as well as those considered not Muslim enough.  This declaration of holy war saw no distinction between races, which angered the Europeans more than the heathen faith they were forced to war with.

By the late 1800s several nations attempted to partition Cameroon along with Nigeria and the Congo into their own properties, Germany and France primarily.  And yet, with the coming of World War I, the British got involved, and after victory they simply claimed the German portion of Central Africa, and divided much of the continent with the French.

The British had little interest in their part of Cameroon, preferring to administer the nation through neighboring Nigeria.  This led to widespread discontent (slavery by this time, of course, had been outlawed officially, although a form of apartheid was present in the social structure of the nation).  Angry people proclaimed that they were merely “a colony of a colony.”  A fight for independence began in 1919, not to be resolved until well after World War II.

World War II, as with virtually everywhere in the world, was a watershed moment for the modernization of this nation, accustomed to being ruled and controlled by outsiders.  And while many natives fought valiantly, the British kept Cameroon as a supply base primarily, often taking what they needed at gunpoint should the poor and starving attempt to keep a portion of the food for their children.

By the 1950s the discontent had overwhelmed the nation.  The British, by then, were pre-occupied with the collapse of their worldwide empire and allowed lesser properties like Cameroon to fall to the French, whom they felt needed a bit of a boost after what they went through in the war.  By 1955 the Communist-inspired Union of the Peoples of Cameroon, mostly a trade union with powerful speakers like Charles Assale

gained a large and increasing following.  The French Communist Party, committing what the mainland considered an act of treason, assisted the union with finances, organization and the proselytizing their political faith.  France outlawed the party and began arresting members.

A guerrilla war exploded in the streets and jungles, eventually leading to both the assassination of the party leader, Ruben Um Nyobe

as well as the question within British Cameroon of whether they should retake and unify the nation, or officially join Nigeria.  What ultimately happened, in 1960 and 1961, was that Cameroon gained its official independence.  This led to internal decisions between the nominally reunified nation, which splits along religious lines, with those in the North, mostly Islamic, choosing to join Nigeria, and the remaining nation fusing back together into an uneasy alliance.

In 1960 and 1961, a new president was elected to run the independent nation, and he decided that the war with the Communist Union was something that needed to be solved.  His name was Ahmadou Ahidjo, and he would rule Cameroon for the next twenty-two years.

The war with the Union did not last long, and within a short time Ahidjo gained complete control over what was left of Cameroon.  He declared the nation a single party state, outlawing all opposition parties.  He also banned criticism of his regime.  Upon finally achieving single party status in 1966 it immediately became mandatory for members of parliament to belong to his party, the Cameroon National Union.  Ahidjo’s control would remain nearly absolute for the next sixteen years.

In 1972 Ahidjo declared that he intended to abolish the federation itself and create a new nation under his exclusive control, that is, if the public supported this.  Considering Ahidjo ran the one political party in the nation and that no one was allowed to run against him, the result was inevitable.  Cynically, Ahidjo named this “The Glorious Revolution of May Twentieth,” a strange revolution for an event that changed nothing.

Success in international soccer tournaments led to the construction of two vast stadiums in Cameroon, one named after Ahidjo, and the other called Unification Stadium.

Ahidjo was a Muslim, but this never impacted his rule.  In fact, regardless of his dictatorial rule, and his constant reference to himself as the “Father of the Nation,” as far as a tyrant goes, Ahidjo was a pretty generous one.  There was no wholesale slaughter of rival people, nor was there really much agitation in the streets, less out of fear and more because of the general tolerance and satisfaction of a growing, modernized economy.  By the time Ahidjo’s rule ended in 1982, due to health reasons, the new generation seemed to agree with his own assessment of himself–Father of Cameroon.

But Ahidjo was not yet done.  Still ruling the party, he attempted to remain in control of the nation from behind the scenes.  Just prior to retiring, he put into place several remarkably unqualified economic advisers to effect the pace of growth for the new President, Paul Biya.

Biya began his administration with an attempt to liberalize the nation’s political structure, opening the doors to opposition voices, but after a failed attempt on his life, Biya decided that Ahjido’s style of governance was perhaps the best way to keep order.

Biya was a Christian, and was therefore embraced by many of the increasingly nervous faithful.  Islam continued to grow both within, and certainly outside the nation.  Cameroon began to feel boxed in by this opposing faith and the radicalism continued to grow.  When in the mid-1980s an economic crisis finally erupted, religious violence began breaking out everywhere.  In fact, the assassination attempt had been orchestrated by Northern Muslims.  Biya decided then and there that he needed to be a stronger dictator than Ahjido ever was.

In 1983 Biya had Ahjido and most of his associates arrested and charged with attempting to orchestrate a coup.  All were sentenced to death, although Biya commuted then sentences to life in prison, which many saw as a sign of weakness.

Every election since since has been marred by controversy, sometimes with public protests by opposition parties, forced to be recognized in the 1990s; with imposed voter boycotts, and with endless charges of fraud and corruption.  The most recent victory, which saw Biya receiving 71.3% of the vote, saw the lowest voter turnout since Cameroon became a democracy.  The anger and indifference is a troubling trend that makes the nation the target for some serious trouble makers.

In 2008 Cameroon erupted into violent protests.  By this time President Biya had declared that he wished to end term limits for his office.  A new political party peopled mostly by the young, the Social Democratic Front, began a reign of looting and vandalism. 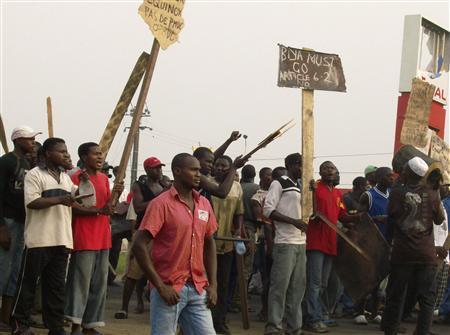 By 2014 a far more drastic invasion hit and violently divided Cameroon.  This was the incursion of Nigeria’s terrorist organization Boko Haram.

With the terror groups kidnapping of the 276 girls from Chibok, in Nigeria, Cameroon declared war against Boko Haram.  In the years since this declaration of 2014, the variety of attacks by the terrorists have left more than 2,500 dead, most of whom were civilians.

Yet the terror continues to grow

and fanatics consume the area, on every side of the battle.

The present is looking rather grim for Cameroon, a nation that has never truly felt the joy of freedom.  And when the politicians and fanatics chirp the word itself (English is the primary language of the land, with some peppering of French), it is an unknowable concept, parsed and manipulated into whatever each leader chooses.  It is a dire time, with non-stop incursions, rampant corruption, economic hardship and the desperation that leads to fundamentalist rebirth.  We need to watch the tensions in Cameroon.  This nation, perhaps more than any other place in the world, may just be the epicenter of every conflict about to envelop all of us.