Is there anything wrong with this?

Why do people have such a problem with love?

Now we know that the majority of us are wracked by doubt–especially regarding our personal relationships.  We wonder how we feel, what the other person feels about us, and if it can possibly ever last.  And with all of these questions consuming us, should anyone actually risk putting their soul on the line when, chances are, as with nearly everything else in life, nothing goes as planned, and your efforts end in sullen disillusion?

The concept of ‘true love’ has certainly taken a hit in our cynical, distracted age, and the fact that most people no longer talk to each other beyond blips and abbreviations on tiny, faceless screens; that there seem to be only a handful of leftover relics who bother having deep conversations with one another (and not us old folks who have already told everything deep about ourselves to the ones we truly love, or have at least settled for.  We have nothing left to say.  But I mean the few youngsters who take note of the way things possibly were once upon a time, through activities, mutual interests, drugs and polyamory, doing their best to avoid divorce for as long as they can).  And that very idea–true love–doesn’t have any meaning, or at least not anything specific, or even as a shared experience.  Nobody experiences anything in the exact same way.

But what does this have to do with the ‘gay agenda,’ some fearful idea that there is a subterranean, subliminal–even Satanic plot to normalize sin, with the paranoid threat that somehow this will be the end of the human race; terrible stories about pillars of salt and the rape of angels, offering a warning about what the true goal actually is.

Let us outline what certain people believe, dependent almost exclusively upon religion to justify their ideas:

This is just a sampling from both the Old and New Testaments, ancient books that tell stories about the way the world will end.  And that is all they really are, apocalyptic mythology attempting to prepare every person for their inevitable death, offering both comfort and warnings, giving individuals the idea that they have led better lives than others.

As a parallel to this thinking–ideas it is difficult to argue are anything more than mere prejudice about inclinations different from one’s own personal modesty finding such acts tasteless, or from hidden desires that terrify, imposing severe complications on the way that some people have been taught they are supposed to live their lives–especially when caught in an airport bathroom stall engaged in the very thing they hate.  And so, as with so many other panics, conspiracy theories come to the forfront, suggesting that homosexuals want 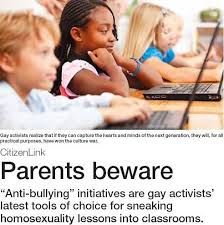 They must mock it:

(the above is of course meant to mock anti-gay thinking, but people believe it is true anyway)

People believe all of these things.  They think that there are people attempting to impose these ideas on the coming generations, not as an effort to promote tolerance and equality of all people, giving them a chance at the same sort of life every other person is free to have (and let us admit, marriage, family life, can be very stressful and might lead to terrible experiences for everyone involved).  No, there must be some secret plot, some evil agenda seeking to change the world.  This is what these monsters want.  This is who they are!

And so celebrities and people with real cultural influence and a public platform start spouting off their terror, promoting fear, imposed upon their audience every bit as harshly as they claim their enemies are attempting to indoctrinate the young:

There are solutions to the crisis, however, these pastors and preachers and doomsayers tell us, offering what little comfort they can in our doomed world, facing the gay Antichrist.

“I just received an alert from the Christian Conservative group, Public Advocate, telling about Paul Ryan’s past support and his vote in 2007 to pass the Gay Bill of Special Rights (H.R. 3685) which makes him the perfect “Trojan Horse” to pass (a) radical homosexual agenda. We Christians cannot allow this to happen. Please therefore call your Congressman or woman and demand they vote against Paul Ryan’s nomination for Speaker of The House. We cannot allow anyone to hold public (office) who in anyway promotes the homosexual agenda.”

The above was heavily posted on numerous Christian web pages, and beyond obvious theocratic sites like Christian Forum (https://www.christianforums.com/threads/paul-ryan-supports-homosexual-agenda.7914545/) such statements spread like wildfire (another thing blamed on the gay agenda, hellfire burning the land of sin) on Facebook and Twitter, and with videos on YouTube:

All of this causes one to wonder–you have to wonder–what exactly the meaning of the term ‘agenda’ is, and how it applies to the larger world around us.  This is not a strictly American phenomenon.  In Africa (where I have a growing fan base, whom I adore, and who have offered me some of the best comments and suggestions I have received), especially in Uganda, we see the political leaders of the nation imposing these views and new laws:

I am not a homosexual.  On a personal level I happen to find men disgusting.  Being one I have plenty of experience learning this about my brethren.  But I am not against love of any sort, nor the desire of people to live their lives honestly.  Before the recent wave of acceptance for homosexuality–the triumph of the gay agenda to some–think about how unhappy married couples often were, a man or woman desperately in the closet, trying to force themselves to feel differently than their minds told them to.  How unhappy are both of them, man and woman, gay and straight, filled with lust and desires for things their partner can never offer?  If anything, this is the imposition of a cruel way of living.

I realize that lesbians have hardly been discussed in this essay,  not out of indifference to the realities that many of these women face,  but because I wanted to talk about the justifications people use to condemn homosexuality, and it seems that primarily the men are targets.  On a more personal level, women are often targeted–hate crimes, family abandonment, a hard life in lands where no one will accept you–but the biblical attacks on their lifestyle are far more difficult to understand.  Sure, gay women get lumped together with the men by lazy, absolutist bigots, but there is also the even more sinister fantasies of the men condemning homosexuality where watching two women together is okay.  They key word there, of course, is “watching,” as though the man was the primary figure in the equation, and the ladies were performing for him.  It is little wonder that the only reference to lesbians in the bible that I could find merely dismisses them as prostitutes, proving that this masturbatory fantasy goes back a long way.

In the end, homosexuality is becoming increasingly acceptable everyday and everywhere, and for all the activists promoting their own agendas, it is important to realize that tolerance is transforming in the modern world.  Hatred seems less and less to be about simply who a person is on the outside and, appropriately, is diving deeper into who a person actually is, the sort of man or woman they present themselves as.  So many of us are hardly worthy of respect.

People with superficial hatreds are a dying breed, yes, condemned by the larger culture, becoming a minority–a hated minority–who are losing their battle, losing those rights that for so very long they have been trying to take away from others.

1 thought on “What is the Gay Agenda?”