Anyone who knows me is aware that I love animals.  I truly do, feeling a deep affection that anger, disillusion and profound disgust has removed from the evolved human species.  Were you view my Facebook page you would discover, other than some rather shameless promotion for this site, numerous short videos about animals being either incredibly sweet, being saved from horror, or just being ridiculous.  I don’t post much about people unless it is with the intention of shaming or mocking them for something they stated truly unspeakable, or maybe some laughter at a joke.  But animals long ago stole my heart.

I remember as a small child that I loved going to the zoo.  I did not have all the awareness that I do today–many sides of the argument about the morality and purpose of zoos–I was just a child excited to see lions and tigers and zebras and giraffe.  I was fortunate enough to live near an impressive zoo where they had elephants and hippopotamus and–at a nearby aquarium, one of the strangest and most obscure creatures I have ever seen, the goblin shark:

I was floored by the bountiful diversity of life on the still wondrous planet earth, and sometimes grew so excited that I was able to see past the occasional trudging boredom of my parents and brother and insist that we spend my birthday at the zoo, even inviting some friends along, half of them equally bored.  There was always a moment–usually my favorite moment, something I still experience to this day when occasionally taking my children around the world in the small space that houses our zoo–when I stand, empathizing with a depressed gorilla, staring at each other, sharing a profound (for me) moment that hopefully gave him a moment of peace.

As I grew older and learned more about nature, about topics involving biodiversity in rain forests, the impact of man-made climate change, and the declining population of many species, as corporate technology dives deeper and deeper through the earth’s crust to extract the final scrapes of something salable, my love for animals took on a nearly activist passion (and that’s another thing anyone who knows me personally could tell you: I am not an activist, do not attend protest marches, regardless of whether I agree with the stance, and am more prone to mocking partisan propaganda than producing it).  My love for animals inspired me to want to defend them.

I once applied for a job at a nearby racetrack, willing to clean the stables and feed the horses just so I might have a few moments spending time with animals I have always had great affection for, soothing my mind with their freedom from judgment.  I was even offered the job, but was told that it was not what I thought it was.  Instead of a stable boy who got to brush the beautiful creatures sometimes, I was asked to serve as a breeding assistant.  I asked what that entailed and then immediately rejected the job.  Yes, I love animals, but not so much that I was willing to get paid to masturbate horses into a jar, and then bring their hot sperm to someone else, who had finally been promoted from my presumptive task to the job of injecting it into the females.

So instead I took on an effort to celebrate and promote animal protection in the only way I am qualified–writing sometimes scathing articles about what is happening to the diverse wonder of our planet.  The great animal that I fear for the most (yet another one of my childhood favorites, and my favorite Spider-Man villain) is the rhino.

Just look at them, our last dinosaurs.  One cannot imagine how tough and how smart this species has to be to have survived as long as they have.  The subspecies that are still nominally living today (we will get into recent extinctions shortly) go back more than 20,000,0000 years, their own ancestors evolving themselves out of existence.  But instead of truly respecting these great and noble creatures, we find monsters (perhaps jealous of their longevity, fully aware that people will wipe themselves out long before reaching our full potential) attempting to profit, too, off the decline of these aging, diminishing animals.

It is literally impossible for me to understand the purpose of hunting rhinoceros (I don’t approve of hunting whatsoever, but the larger issue I will acknowledge is personal, and there are some over-populated species who would all starve without some of them being picked off for antlers and food.) 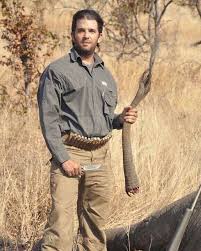 Above we see an example of hunting for no good reason, or even for cruel reasons.  This is Donald Trump, Jr., first lusting after trophy antlers, then carrying those antlers away.  The last smug picture is him holding a severed elephant’s tail in his hand.  Trophy hunting.  Jabbing the head of an enemy on a stick outside of your house.  I do not draw a distinction.

The Rhinoceros is in dire straits, most if not all of the subspecies set to disappear within the present century.

This is the Javan Rhino:

(the black rhinoceros was declared extinct in 2011, the victim of poachers)

Everywhere in the world the total population of rhinoceros is under 30,000.  Even worse, there are about 100 Sumatran rhinos, and only 60 Javan rhinos.  As for the white rhino there remain two living members of the species, both female.  Extinction is almost here.

The reason that the pathetic overall population is so high, in fact, is the result of a handful of elephants still wandering Asia, more subspecies of the subspecies.  I have focused here on Africa.  In Asia the treatment is hardly better:

As the numbers above imply, most of these are Indian rhinoceros:

I realize that these beautiful animals, rarer and rarer every day, are not equipped to survive in the world that we have made.  These wise, older, anachronistic dinosaurs are one of the last traces we have left of a past we continue to mythologize into monster movies and toys, ignoring the real value, once again, of our planet’s history and our own impact upon it.

If you have a desire to help at the very least delay this genocide of creatures too many people deem so far beneath us that it does not matter whether they exist, please contact the following:

As well as many other wildlife protection agencies.  This is an issue more urgent than many people may realize, perhaps feeling sad but writing it all off as inevitable changes in the world.  If a powerful species like the rhinoceros can be wiped off the face of the earth so rapidly after reigning for more than twenty million years, how can we any longer deny human impact on our planet?  How can we, with our weakness and lack of armor, possibly live in the face of change for as long as the rhinoceros did?