So the most aggressive challenge to Roe versus Wade has been undertaken lately by numerous Southern and Mid-Wastern states, attempting to overturn a law many of the legisators from those places believe is legalized murder.  I am not so much going to defend abortion–a terrible thing, even when it is necessary–and I am certainly not about to defend the outraged religious morality that is attempting to further overpopulate the US with unwanted children.  I would like to attempt the rarist of things on this issue that inevitably devolves into emotionalism.  I’d like to have a rational discussion about abortion, when it is wrong, and when it is truly needed, and the vicious manner in which each side attempts to justify their beliefs.

Nobody wants an abortion.  Regardless of the handful of dipshits who parade themselves around like this: 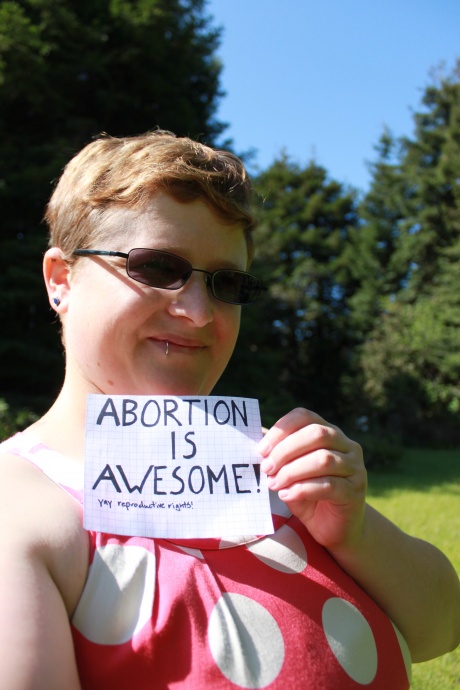 or the borderline terrorist gaggle of lunatics like this:

This is a very sensitive issue and we should not lull ourselves into rage by focusing on the extremes.  There is a real world that abortion effects–the entire world, in fact, outside of the kooks shouting their protests inside cult-like movements.  There are the actual reasons women decide to get abortions, the genuine guilt many of them suffer afterwords, and the hard, agonizing choice they are forced to make whether to keep their eventual child, or save it and themselves from a future life of misery.  It is a hard choice, and people from either side of this issue need to acknowledge this.  Again, no one looks forward to an abortion, stating “I can’t wait to have an abortion!”  It is simply a legal reality that can offer salvation to a person’s life, and to an unborn child destined for poverty, helplessness, and the inevitablity of a pointless death.

Now the reasons abortion was legalized are pretty basic: women in dire situations were going to get one anyway, whether because they were sick, because they were poor, because they had cheated on their spouse and the child was not his, or because they were so young that they would never have the opportunity to raise their child right, leading to a hopeless life.  The abortions they then raced around to secret places to experience behind the closed door of a disgraced obstetrican, or a sympathetic midwife were barbaric.

Before Roe v. Wade became law in 1973 there are some pretty harrowing statistics:

These facts are terrifying, and they certainly make the case as to why, for those choosing abortion, legalization is very important.  But there are opposing ‘facts’ that opposing factions use to justify their ideas.  And while one side is in favor of freedom of choice and the goal of women’s reproductive rights, the other believes that life begins at conception (and we can ignore, at least for the space of today’s discussion, the hypocrisy of this support of life, the obvious points that after children are born much of the pro-life community forgets about the children, or their majority support of the death penalty.  We can discuss the genuine, although rare, use of abortion as birth control because “sex doesn’t feel good when he wears a condom.”)

‘I FIND IT KINKY TO ABORT FETUSES’, JOKES PLANNED PARENTHOOD SUPPORTER ON CAMPUS

There is also a deep divide between a belief in the reasons women get abortions.  It seems that everyone can get their own preferencial facts: Additionally they argue about just how deadly the practice is:

One side makes one arguement and they other side attempts to discount it.  And both sides can gather their facts, their individual advocates, and present each idea as the true reality.  It is a maddening issue.

Prior to Roe v. Wade the protest movements for legalized abortion were about more than just the single issue:

Women’s rights were first and foremost–protection from a male dominated society that had traditionally and for so long “kept women in their place.”  There was no sympathy for women who were raped, whether by family or otherwise.  There was a shrug of the shoulders, blaming the victim (in some nations even today rape victims are executed for having committed adultery), a masculine suspiction that the woman wanted it, and the inevitable agony for those who did not creep away to some backalley slaughterhouse, that every time they stared into the child’s face they would see their rapist, and every time the father looked he would realize that it wasn’t his.

Modern movements still exist as the war against the law raises its intentsity and the same fight mutates with the violent divides that exist today:

Pictures of the dead, poignant arguments to prove the validity of the argument.

But the anti-abortion movement has the occasional evidence that makes one gasp, seeing what some doctor decided to save after having an “awakening:”

They even use transparently (and make-up artist designed) fakes to tug at the heartstrings:

And this is what they claim, attempting to use “experts” to justify their stance:

The pro-choice lobby attempts to refocus the argument, understandably, on the mothers and their health:

And yet the whole debate must come down to freedom of choice, the freedom to make your own destiny, and the inevitable consequences of your choices.  There are plenty of women who regret having had an abortion just as there are many who believe that it was the best decision they made at that time in their lives.  There are new mothers who had once had abortions who love their children even more because they were born at the right time, so they and she can have a better life, more stable, and be loved and not resented for the numerous struggles they are bound to cause.  Which leads us to today, and the regressive efforts to overturn the law–at least in individual states, making the same primitive argument, ultimately, that the South did over the US Civil War.  It is no different, at least in a sense, than pro-slavery.  It is a restriction of the rights of a large swath of civilization.  And while the specifics are certainly different, perhaps not nearly as immoral as the practice of slavery, one cannot help be see the parallels:

Yet still the anti-choice legislation makes some strong arguments, shocking us with their sincerity and how far they are willing to go to defend their passion.  They spill blood on people at pro-choice rallys–there has even been the suggestion of dumping aborted fetuses on the advocates.

There are manipulative ads, unreal because this

Crazed parents also use the issue of stem cell research and their anti-vaccine insanity to enforce a duel-sided outrage and fear:

They might even attempt to turn the abortion debate into some other social issue entirely, avoiding their pro-life stance in order to focus on a different problem, something that many young people might be able to relate to on the surface:

And yet now, under Donald Trump, someone whom I have said before and repeat once again, does not actually believe in anything other than money, pro-life advocates are fixated on the Supreme Court promises the President has made and reasonably kept.

Pro-choice advocates are understandably upset by this change in the face of the Supreme Court, the highest arc of legal jurisdiction.  Of course disregarded in this single issue fight on the pro-life/anti-choice side is just how much this might change other issues in the culture, including providing limits to free speech, imposing altered rights regarding protection from oppressive laws, and changing the structure of government itself until dictatorship can easily slide in and create a nation that can absolish congress and change the judges randomly should one dare disagree.  There are no limits, you see, to absolutism.  If one single issue is all you care about–and this is directed at every side of any single issue–then you are missing and disregarding the larger picture, the very idea of freedom.

In the end, this is all that is left to consider: