It was 312 AD and the world was about to profoundly change forever.  Rome, still at the height of its global domination, found its anxious Emperor, who came to be known as Constintine the Great–

worrying over an upcoming battle with a rival emperor.  According to subsequent Christian history he had a vision in his sleep the evening before the Battle of Milvian Bridge.

is that Constintine saw the flaming image of a cross, surrounded by angels, glowing in the sky.  Now Rome had been rift by religious warfare since shortly before the death of Christ nearly 300 years before.  Christianity had rapidly consumed the hearts and minds of much of the oppressed populace, most of whom were slaves in one form or another.  Even Constintine’s mother Helena

had converted in her youth (although conflicting scholars sometimes claim that it was Constintine who first converted, encouraging his mother to follow suit).

Let’s hear the myth of what ancient historians claim happened:

So he had this dream, right?  And in his dream he saw a blood-red cross shimmering.  And he saw words in the sky (“In hoc signo vinces,” or “In this sign you will conquer”), declared later to have come from God Itself, and It said to place this symbol upon the arms of his men and surely they would win every battle.

The war in question was a terrible one.  The then Emperor Maxentius

had been busy outlawing and slaughtering Christians and Jews.  In 306 AD Maxentius ascended to the throne, much to the chagrin of numerous political rivals.  In 305, as a matter of fact, two different emperors had taken over Rome. Valerius Severus was declared emperor by Galerius, who had himself been emperor since 293. 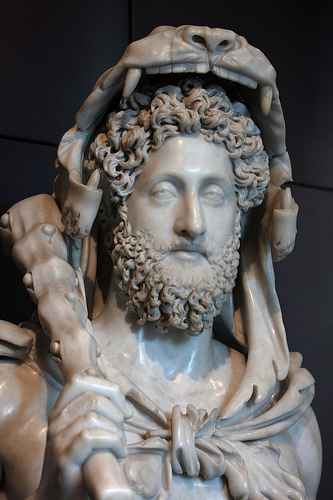 Also in competition for the throne was Constantius (Constantine’s father), co-emperor since 293.

This complicated mess of rulers barely tolerated each other.  When Constantine himself was about to become Emperor in 306, the other emperors formed a coalition, denying the young man his rightful place (he and his supporters believed), and partisan hostilities broke out.  It was Maxentius who formed a seperate rule, taking over the west and declaring war against his rivals.  Other governors of smaller regions were also declaring themselves emperor at this time, and all of Italy seemed on the verge of collapse, breaking into tiny nation-states constantly at war with each other.

As Maxentius continued moving forward, defeating the forces of Severus and Galerius, Contantine began to seperate his own forces throughout various regions, seeking to surround Maxentius–Rome itself.  The defeated armies of Severus and Galerius saw Constantine’s ambitions as synonymous with their own and they knelt and apologized, joining forces with the future king.

Constantine lead his faction of more that 40,000 soldiers through the Alps and even into Spain (where he was met has an honored dignitary).  Meantime Maxentius had become lazy, over-confident and thus unwilling to forment a new plan of attack.  He figured that since he had already been so successful, why waste his time even considering the raw troops of a rival he could easily defeat?

Milvian Bridge was an important throughway to trade with the entirety of Europe, impressively scaled across the Tiber river.  As Constintine and his army were marching over the bridge toward Rome, Maxentius decided to change his mind after all and send his troops out to obliterate the invaders.  It was, of course, they who were defeated, eventually leading to Maxentius drowning in the Tiber.  His head was then sliced off, jabbed onto a pike, and paraded through the streets of Rome to annouce the end of the Tetrachy of competing emperors and the ascention of the one true ruler.

Shortly after this, those later church historians claimed, Constantine not only legalized Christianity and forced upon the entire empire his new, politically expedient faith, but he allowed the traditional polytheistic faiths to remain while the missionaires infiltrated the communities with demands of conversion.  It was only the Jews who remained outlawed, scapegoats required for when the Christian God simply did not fulfill every desire of the Emperor.

Constantine was also later considered the first Pope, but even this has caused great and violent dispute.  Dan Brown’s runaway bestseller The DaVinci Code (https://www.abebooks.com/servlet/SearchResults?isbn=9780593057414&n=100121503&cm_sp=mbc-_-ISBN-_-used) is only the most recent variation on Constintine’s “true” nature (of course followed by the thousands of panicked conspiracy theories that not only challenge a work of fiction, but state increasingly paranoid views of the foundation of Christianity, including several that state that it was really ancient reptilian space invaders who founded the legend of Christ in order to numb the people and distract them from their rule (https://www.abebooks.com/servlet/SearchResults?isbn=9780977790432&n=100121503&cm_sp=mbc-_-ISBN-_-used).

To summarize the main theory in a nutshell we need only look at a few doctrinaire points:

At the time there were numerous Gnostic Gospels (https://www.abebooks.com/servlet/SearchResults?isbn=9780679724537&n=100121503&cm_sp=mbc-_-ISBN-_-used) being told as oral histories to the majority illiterate masses around campfires at night.  These stories include many contradictory narratives to the traditional Matthew, Mark, Luke and John tales (whose own contradictions are far less profound.)  Just to give one example we can look at The Book of Judas (https://www.abebooks.com/servlet/SearchResults?isbn=9780977790432&n=100121503&cm_sp=mbc-_-ISBN-_-used), a fascinating variation of the nature of Christianity.

The Book of Judas tells the story of Judas Iscariot, the famous betrayer of Christ whom Dante in his Inferno (https://www.abebooks.com/servlet/BookDetailsPL?bi=30196873883&searchurl=kn%3Ddante%2Binferno%26sortby%3D17&cm_sp=snippet-_-srp1-_-title5) places directly in Satan’s mouth.  But the Book of Judas sees the man differently.  In fact, he is portrayed as the closest disciple to Christ.  It claims that Jesus took Judas aside and told him that he must sacrifice his name and good reputation by turning him over to the Romans.  He told the shivering, refusing man that he would be the closest to God if he did what must be done.  Judas was told that without his betrayal the new faith could never be born.

There were numerous other stories, including holding Mary Magdalene as one of the key prophets of the faith, one higher than even John the Baptist.  The whole Jesus bloodline thing, with his survival and later wedding to Mary, children and everything, was even being bandied about back then in the 4th century.  The whole development of the Gospels, therefore, falls almost entirely upon Constantine’s back.

Constantine has also been vilified by anti-Catholic Christians.  “This story, most famously told by Jehovah Witnesses and Fundamentalist Protestants . . . (states that) Constantine waited to be baptized on his death-bed, in the year 337. This may indicate a reluctance to convert fully, although it may also mean that like many others of that time, he wanted to be cleansed of his sins at the last possible moment before facing God.”  They call the cross a pagan symbol, state that it was Constintine who elevated Jesus Christ to God when Jesus himself referred to everyone as children of God, and never to himself as directly Its ‘son.’  They declare that the celebrations of both Christmas and Easter are also false, pagan ceremonies dedicated to Satan.  They say Emperor Constantine as the most evil man who ever lived.

And so the divisions between Christianity set up endless holy wars, broke apart families and unified churches, and spread even wider the disinterested non-belief that got many more people killed.  The war for a single religion further scattered with the founding of Islam in 632, a new idea inspired by yet another slave revolt, and enhanced by a literary history far more mystical and different that the repetitious Roman tragedies of the day (https://www.abebooks.com/servlet/SearchResults?an=philip+whaley+harsh&bi=s&ds=5&n=100121503&sortby=1&tn=anthology+roman+drama&cm_sp=mbc-_-ats-_-filter).  Islam caught on rapidly, more of a protest movement against Christian inquisitioners than anything else.

It was these wars that ultimately led to the increased spread of Islam, as borderline Christians and many atheists, deserpate enough to seek out any alternative to the oppressive violence of the dominate faith, converted en masse both out of sympathy and new found evangelical passion.

And so the lessons of early Roman Catholicism show us a great deal about today, about our divides over slight disagreements, about the ease we find to hate those who are different, and about human desperation to follow a leader with a vision, no matter how absurd.  We see how we have always followed, regardless of lies.  We will believe them because to see reality creates doubt, and there is nothing worse we can suffer from when trying to hold our fragmented world together.  People need to unite behind something in order to avoid the terror of taking responsibility for their lives.  Just remember, remember, the foundation of organized Christianity comes from a supposed harsh dream of warfare and about the way to unite an army behind a single idea, not just a gang of mercinaries who will flee the moment things turn against them.  No, the idea needs to be something worth dying for, something higher than the self.  This was, again, what people claimed Constantine saw:

It was not this

No, they say he saw this

And this is what the entire modern church, or the opposition to this vision, is based upon.

Part two of Elsewhere Series 4 will discuss the development and implimentation of the Magna Carta and how this, too, was perverted to operate, organize, and control the European mind and larger world.