Let’s get beyond Christopher Columbus and his subterranean cruelty.  Here’s a quote from him and we will leave it at that:

“While I was in the boat, I captured a very beautiful Carib woman, whom the said Lord Admiral gave to me. When I had taken her to my cabin she was naked—as was their custom. I was filled with a desire to take my pleasure with her and attempted to satisfy my desire. She was unwilling, and so treated me with her nails that I wished I had never begun. But—to cut a long story short—I then took a piece of rope and whipped her soundly, and she let forth such incredible screams that you would not have believed your ears. Eventually we came to such terms, I assure you, that you would have thought that she had been brought up in a school for whores.”

But what about after Columbus, in those years following the Spanish subjugation of the natives when the land–the New World–was established, and the rest of the European powers saw opportunity and the chance for conquest so great that they could eliminate their rivals for good.

In the early 16th century the Habsburg empire brought about a true golden age for Spain.

This is how they viewed themselves, apparently atop mount Olympus (or Sinai), nearest to the castles of Heaven, closer to God than the rest of the world.  They saw the world as a battle for God, a war against all others proclaiming different or even slight variations on their own faith.  It was a barbaric time, regardless of their visions.

Both of the above images are from roughly the same time.  Spain, under the Hapsburgs.  From 1519-1598 they were ruled by two kings, Charles V (also called the “Holy Roman Emperor” for his violently dedicated faith) and Philip II.

Now Charles spent most of his 37 years on the throne at war with France.  Beginning in 1521 after years of negotiations with Henry VIII of Great Britain

an alliance was finally formed, and Charles V agreed to declare war on Henry’s greatest enemy (at the time), French emperor Francis I

The war lasted for five years, and in 1525 the Spanish, actually led on the battlefield by King Charles, captured Francis.  It was the Battle of Pavia

that finished this war, and led to Charles turning on his allies in order to claim more land for his territories.  In order to be set free Francis handed over the Burgundy region in the Treaty of Madrid, which also included France withdrawing support of numerous British colonies, freeing the powerful Spanish Armada to pursue further conquest.

Of course after being released Francis I renounced the treaty and desperately attempted an alliance with the new pope, Clement VII,

who had spent most of his early years as pontiff attempting to gain the favor of Henry VIII and other, lesser monarchs, in a treaty to protect Rome from imperial conquest. 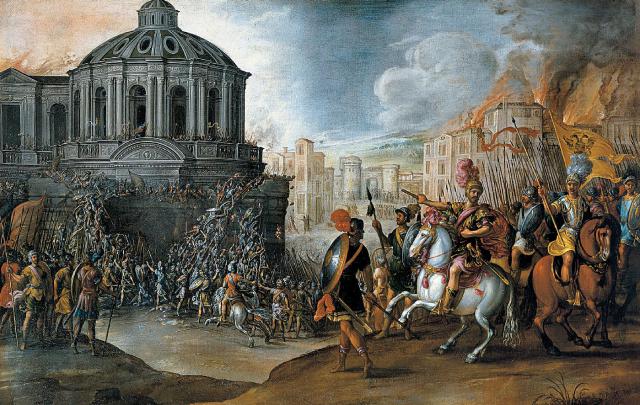 This was ultimately approved of by Henry VIII, because his marriage to Catherine of Aragon (Charles V’s aunt)

had failed to produce a male heir.  Henry wanted a divorce and Clement had supported Catholic doctrine over loyalty to the Supreme Leader.  This would eventually lead to the English Reformation, where divisions within Christianity opened up a whole new world of conflict.  (But that is a story for Elsewhere Series V, the Renaissance, Reformation, and other global transformations).

This war, however, ended in a stalemate, the dangers of imprisoning a Pope (even one as ineffectual as Clement VII) proving too great.  It was not worth risking the whole world turning against him and so Rome was returned, although Burgundy remained under the Spanish crown.

Yet another war with France broke out in 1536 and lasted intermittently until 1544.  This began when Charles installed his son, and future emperor Philip, as Grand Duke, despite Francis’ claim on it as part of the last treaty.  This war led to new alliances between emperors, notably Francis joining with Ottoman sultan Suleiman the Magnificent.

Charles groveled back to Henry VIII, who aligned once more out of fear that Islam might spread into England.

Spain had also been quietly warring with the Ottomans since 1526, mostly out of an arms race to build the larger fleet.  By the time Charles died of malaria in 1558 the Ottomans had nearly destroyed Spain’s navy, conquering nearly the entire Mediterranean. 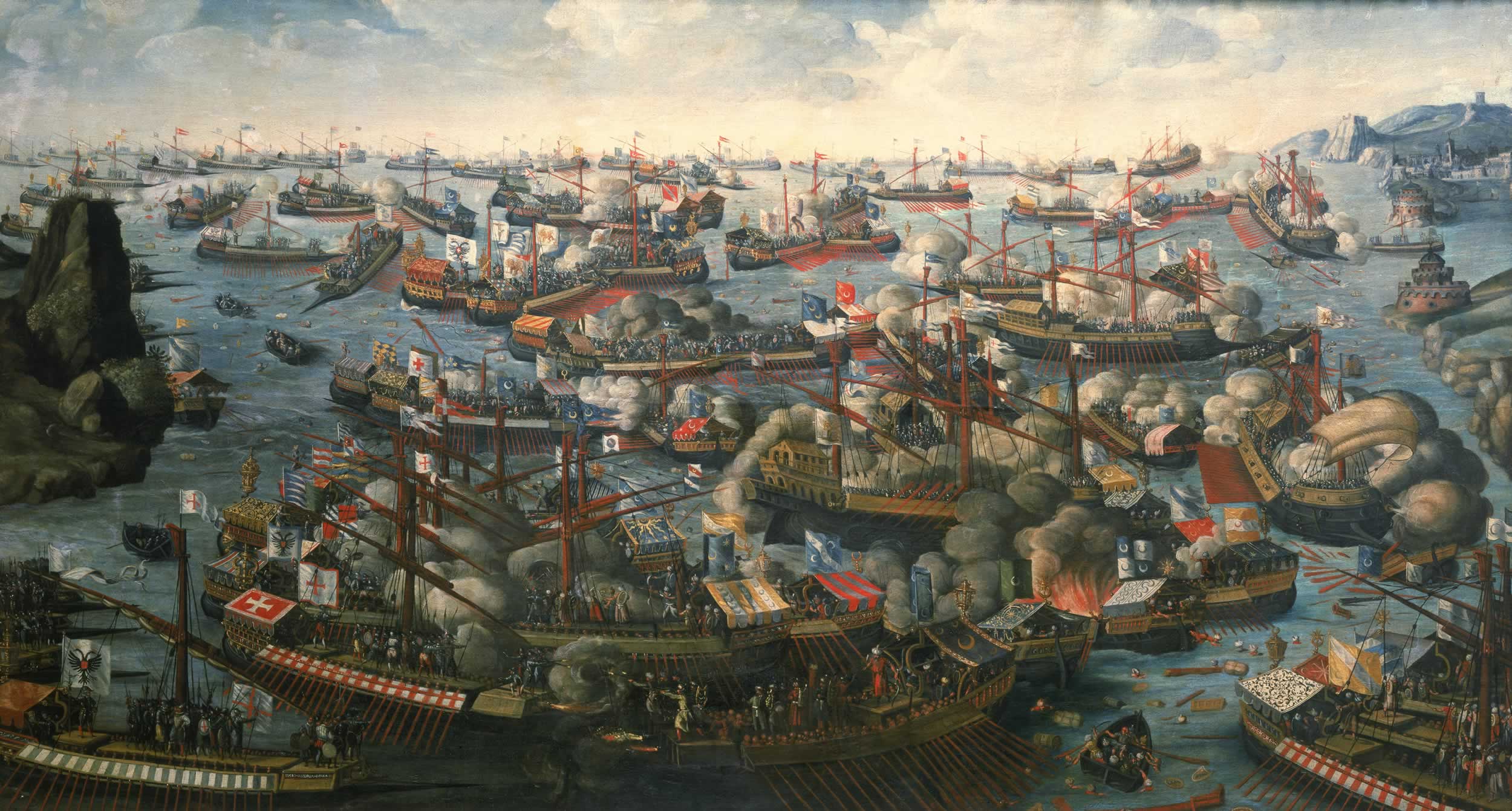 Philip II ascended to the throne in 1556 once his father grew ill and lasted for the next 42 years.  Philip dealt with bankruptcies and revolutions throughout most of his reign, most notably in the Act of Abjuration, which was a Dutch declaration of independence, signed at the Hague in 1581.  The Dutch war with Spain, however, began in 1568 and came to be known as the Eighty Years’ War, and dragged in all the European powers.

So while seemingly everyone was embroiled in war throughout Europe (or being crushed and doomed by the family feuds that were known as empires), in the New World a different transformation was occurring.

We can talk about Pilgrims and Plymouth Rock and all the creepy British religious fanatics who enslaved the Indians, and we can also head up north to Canada to watch what the French did to the natives, but Spain, at least in the early years, had a much deeper impact on the development of the Americas.

Think about this: what language is most readily spoken from Mexico all the way down to the southern tip of South America?

Every one of these nations was conquered and controlled by Spain.  There are three (and Haiti) that are not to this day Spanish-speaking  The neighboring Portugal managed to claim Brazil, and France and England took the rest, but the development of the gloriously fallow land was hard enough work for nations in states of perpetual war.  In those early days Spain also ruled Florida, Texas, and other Southern lands in the eventual United States (New Mexico, anyone?), but the warfare that was destroying Spain and much of the rest of the world was not limited to merely Europe.  And with the cunning rapacity of all the European powers, giving the natives deadlier weapons and teaching them how to use them, there were plenty of internal attacks as well.  The New World increasingly resembled the old world, and this seed of violence was planted, having sprouted into near anarchy today.  If we look over every single one of the nations controlled by both England and Spain we will find a terrifying history of violence, revolutions and tyranny, both from outside and within.

This growing region was at the time called New Spain, much like New England and New France dominated their own areas with an equal lack of imagination.  It was the arrogance, really, that disenchanted not only the natives, but especially those sent by their empires to control and colonize the land.  It was these people and their children after them as they came of age knowing no other land or way of life who started to rebel, inspired every bit as much by the revolutions then dominating Europe:

This does not even include the numerous revolutions that broke out in Asia and Africa and the New World itself.  The revolutionary fervor was strong in the 17th century, all the way through, inspiring the future generations of the 18th century to the glory of the American Revolution and the tragedy of the French Revolution.  There were also, of course, the numerous civil wars, the colonists versus the natives and against themselves.  The natives taking sides and fighting among themselves.  Ideology had overtaken everything and it was not just religion controlling the world.  As thoughts of freedom grew and grew people began to realize that they no longer wanted to be told what to do.  For the children of the New World, raised with the idea that they could create their own destinies, outside rule and even the monarchy itself were no longer valid.  Everything was considered tyranny, all governance, and the instinct for anarchy rose out of Spain’s style of conquering.  While with England and France the natives and their rivals were simply killed, a handful of youth and women raised as slaves, re-populating the land with mixed race spawn, the children of rape,

Spain was more interested in slavery, in empire building.  Only the truly rebellious were slaughtered (along with a few casual murders, not considered crimes), and the rest were crushed so thoroughly that they simply kneeled and begged for mercy. And so Spain destroyed empires–the Aztec under Hernan Cortes

the Inca, under Francisco Pizarro

But it couldn’t last, not in this new world (in the New World), where growing populations were running away from the corrupt empires, seeking if not absolute freedom, then at least a safe place away from all the violence.

Oh!  And let us not forget the insanity, the crazy dreams of mystical relics many of the Spanish believed could be found in this cherry land, consumed by natural beauty soon to be destroyed in the search.  We have Ponce de Leon and his search for the Fountain of Youth

and numerous fanatics panting in the land, seeking the Holy Grail in what they started calling New Jerusalem. 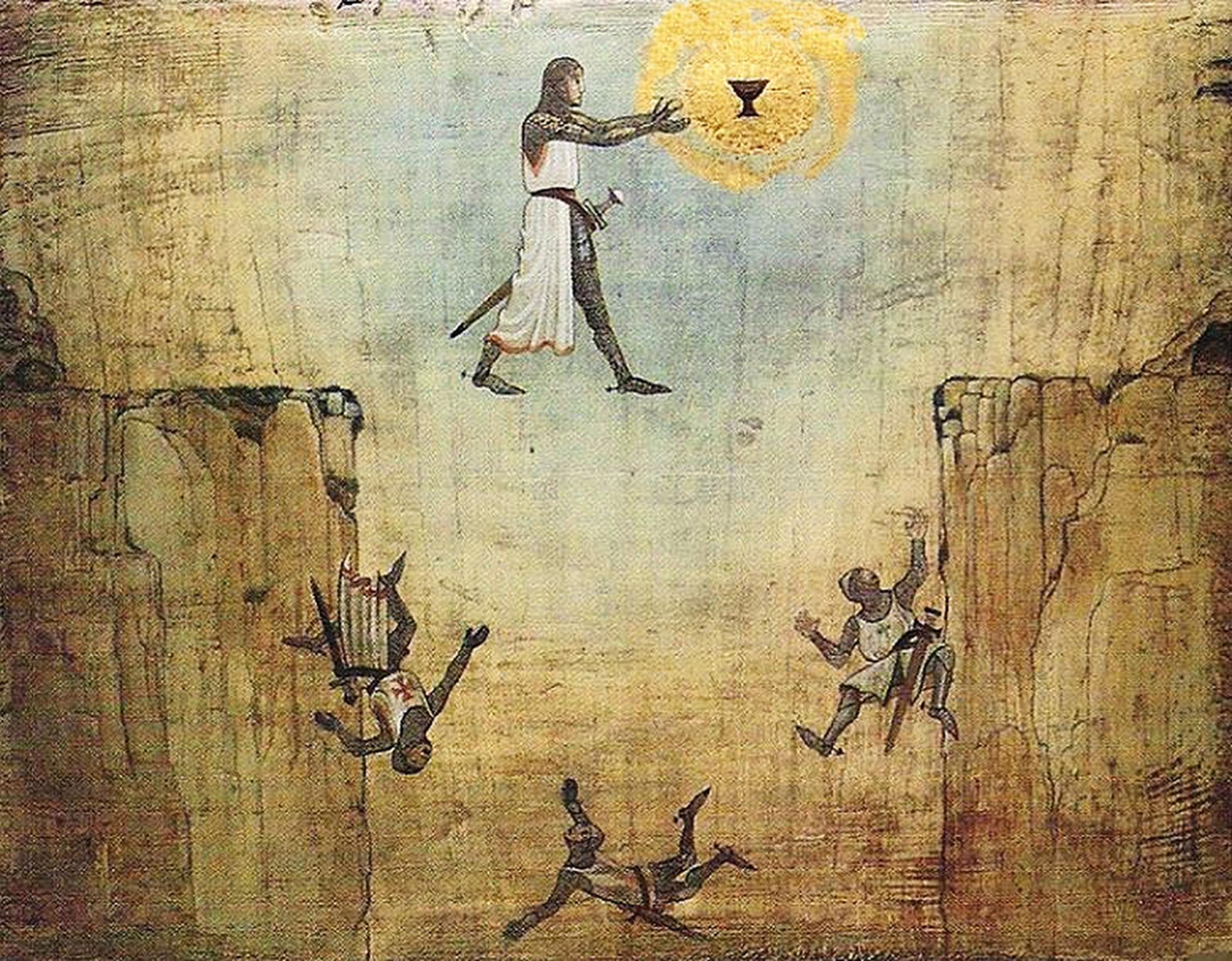 The Europeans brought their ingrained instincts, madness and cruelty, raised, as they were, in such a chaotic, barbaric world of presumed superiority.  In the end nothing really changed.  The Europeans brought their worst natures along with them to the New World, corrupting it utterly, until what was once thought of by the rich as a vacation spot, as a profit building colony, established itself based upon the principles of greed and the quest for empire.  And this is what has been birthed into the world, the most powerful nation today filled with savage, arrogant people, both the European bred and the scion of the slaves eventually set free, willing to do anything–anything!–to conquer whatever small portion of the world they believe is rightfully their domain.