What is your least favorite thing about the summer?  I know for me it is the heat, that crushing humidity that causes, upon the moment you awake, a sort of creeping exhaustion that can end your ambitions for the day within minutes.  And while I live in a comfortably air-conditioned home, and can escape for the most part from the worst parts of the day (doing this and the other projects that are actually for profit, I get to work out of my house).  But this does not alleviate all of the stress, the impatience, the irrational anger that often erupts when you are outside sweating and dehydrated (perhaps walking your panting dog).  Your work seems to never get done and all those other fucking people get in your way.  Goddammit, move!

This might be in the car, in a store, all of those places with the capacity to momentarily cool you off, but the truth is that summer keeps growing into an increasingly uncomfortable time.  To further prove this point we need only look at the sort of crimes and heinous civil rights violations that are far more prevalent in the hottest months than in those frozen wastes of a day where you shiver and wish yourself inside, away from the churning chaos of the world.  Here, have a look:

Of course a sample like above can be written off by the majority of people–“Ugh!  Chicago!  Those crazies kill each other all the time!”  But of course this is not true.  Here are some other examples, all around the world:

Just a handful from around the world.  The first one is from longer ago, sure, but it also shows a pattern of violence in the summer.  Think: the civil rights movement offered a “Freedom Summer.”  The results? 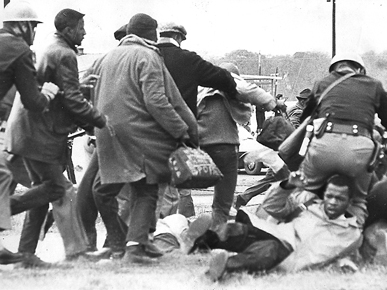 Lest we think this is only a white racist thing, or a fed up, exhausted, angry and frustrated police thing, targeting the easiest victims, let us widen the phenomenon of summer violence into the present:

Of course some of the results of these events are more horrifying than most of us may realize.  I’m going to add a warning for the images that follow.  They are terrible, terrible things–perhaps the worst that any person (or group of people) could ever do to anyone, no matter the reason:

Every last one of these crimes were committed in the summertime.  Of course individual murders can happen at any time, anywhere, and it might even be possible to piece together a motive, if not an actual reason, but there remains something about the summer that seems to heighten such actions.  Think about the bulk of the recent police shootings of unarmed (mostly black) people.  This is just a sample of questionable shootings by police since 2017, from June to September only:

Of course there are literally hundreds more shootings throughout the months in question over the past three years.  And yes, many of those I did not mention seem justified.  We must admit that sometimes the police have to shoot people to protect both themselves and others.  But many more cases have questions that need to be answered, and our growing lack of trust (which is not entirely the police’s fault, although the explosion of incidents such as these do not help their credibility) for everyone and everything else gives rise to beliefs in things that couldn’t possibly be true.  And when someone whom we love is killed, no matter how much we might know about a person who was justifiably shot, we still seek to blame, we still rage in the stifling heat, and we wonder what we can do, what sort of revenge we might offer, or whether we can start a disruptive protest movement that catches on like the wildfires of summer, burning all bridges and causing us to keep turning against one another, all because some asshole got so angry in the middle of a heat wave that their rage came to define all others.

Everywhere, all over the world.  It isn’t just Paris which is burning