Let’s get it out of the way before diving into controversy: racism is a very real, very violent, hideous toxin, a stain on the worthiness of humanity.  It is the true mark of Cain, that symbol defining who we truly are.  Racists are low down animals, whining and moaning and finally finding excuses for their decision to point the finger of blame not at their own failures and miserable lives, but at people who never knew nor even cared that they exist.  This is a definition of racism and it is important to start off with that point.

Yes, it’s a big however in an age of hypersensitivity.  People find themselves suddenly offended by anything, masking their own prejudices in the guise of ill-fitting victim-hood.  As with any racist (and yes, people whose primary focus on the social conditions of life, no matter who they are and what their experiences might be, are racists), blaming other people is how most of us convince ourselves that whatever went wrong is not our own fault (see the first paragraph when considering all those things that do not fit this mold).

For the purpose of this piece we shall focus mostly on black and white relations, although any diversion of race, including all varieties of mixture, certainly applies.  The cheap, bald stereotypes that dismiss all sorts of people are never a valid argument, nor even a condemnation, of who another person might be.  The truth of the matter is that every race has its collection of assholes.

I find it startling that someone being an asshole or calling another an asshole can be transformed into a racial issue.  “Quit being such an asshole,” a person might say, or they scream from their car about somebody cutting them off.  “Asshole!” they holler, blaring their horn.  In this model of road rage it sometimes descends into separate name-calling, even devolving into racial lines.  “White motherfucker!” one asshole might say, or “Stupid nigger!” drools out of the mouth of another asshole.  And yet the whole point is deluded into this senseless, meaningless blather.  The fact that one or both of these people are being assholes gets lost once these lingual codes are mouthed off for no discernible reason.  In fact, it is possible that neither of these assholes is actually a racist, merely a bully, or someone desperate to offend the person they feel has wronged them.  The color-line language drips out and becomes superfluous given certain contexts.  Hell, it is likely that all the person meant by calling each other names is, “Hey!  You’re an asshole!”

Several years back now I was once a high school English teacher.  I worked at a very large school in a poor neighborhood on the north end of a huge east coast USA city.  Often I was the lone white guy in the room.  As each school year started I was usually eyed up with suspicion.  I could certainly understand why, these kids having faced a good deal of overt and institutional racism, their parents and grandparents denied opportunities that would otherwise be open to their children had they been allowed the chance to thrive.  And many of the other white teachers were, in fact, racist.  You could hear them talking about the students–most often the actual assholes–and discrediting their own outrage with racial language.  As for me, I was really just impatient and intolerant with the issue before us.

Some of the more inquisitive students would even ask me about my racial views.  I would laugh.  I would say, “To me we’re all equally worthless.”  This got me a few laughs, and then I would dive in, seeing a mostly receptive audience.  “Listen,” I continued, “I really don’t have any tolerance for racism.  I mean, get to know someone.  You’ll find a much better reason to hate them.”  I told them that racism was lazy, was the thoughts of a cowardly mind.  I would sneer at people who barked out such nonsense.  And then I would call one of the students interrupting what was conceivably the most important lesson I had to teach the class, I would say, “Shut up, asshole.”  (I really did too, and far more than once.  This, instead of getting me into trouble actually made me more popular with the students.  “Yo, Mr. —– tells it like it is!”)  One of the most significant points I tried to make, I believe, was that given where most people live, given the general lack of diversity within neighborhoods, chances were that the people in the world that each of us hate the most are members of our own race.  I received quiet nods of agreement before we moved on to talk about MacBeth or 1984.

And yet some of these students would blame everything on racism.  Didn’t do their homework?  The assignment was racist.  Failed a test?  Racist.  Embarrassed a student in class, whether intentionally or inadvertently?  “You’re a fucking racist!”  I would never get fired for saying ‘fuck’ in class (another thing I frequently would do–demanding obedience to a language code was a losing battle and, since I was trying to teach every one of them to find their own voice, I would allow them to express themselves openly, their ideas often spectacularly vulgar), but even the suggestion that I was being racist would not only cause me to lose my job, but I might even get sued.  None of this ever happened to me, but I had heard stories of terrible warning from other teachers.

Often things are misunderstood, a joke or a play on words causing a person to believe something that was never intended or even never actually said was a slur.  And yet it is a truth to the victimized.  Of course this asks the question, who is the actual racist?

As for white people, shit.  White people certainly have a terrible history of race relations.  The dominant conquering species of humanity throughout most of our recent history, the white man literally fills volumes with his awfulness.  And yet the deeds of some can never define the whole.  It might be easy to do, but that returns us to the idea of racism.  Generalizing everyone as one thing is the functional definition of racism.  White people are sometimes targeted for racial reasons, but so many white folks today, living in this age when so many thousands of years of race-mixing has finally deluded the idea of racial purity, the white man sees himself as no longer the vast majority.  He starts shrieking “Reverse racism!” (an incredibly stupid term, seeming to acknowledge that their own racism is being undermined by another’s more virulent hatred.)  There are some people today who even believe that anti-white racism is far worse than the age-old traditional form.  They believe it is the “new racism” (again, an acknowledgment of their own prejudice).  Somehow they have convinced themselves that everyone is out to get them and that, eventually, every white person will be put into chains and raped like some KKK fetish, a deep early morning masturbation session that sees them feeling disgusted with themselves afterwards, blaming the Jews or liberals or somebody for implanting such thoughts in their head.

People who are obsessed with race see everything in a racial light.  Even those who proclaim themselves “anti-racist,” or declare that “they don’t see color,” are dishonest racists.  Of course they see color!  How would they know that they were anti-racist if they were unable to make such distinctions.  I mean, when you are asked what someone looks like that you just met, how do we describe them?  “Short hair.  Tall.  A flat nose.  Piercing green eyes . . . a black guy . . .” (or African-American, or however people choose to designate someone culturally and superficially different from themselves).  And to be “anti-racist” seems to miss the point.  Young white liberals–college kids, mostly, who stand around at Black Lives Matter protests are often far more outraged than the sincere individuals announcing themselves.  These are the same people who condemn “old white men”

It is certainly valid to be against racism, to protest against it.  But there is something else in a declaration that some people are not welcome in a nation.  These are the words of a racist.  The hypocrisy is amazing.  Some people seem to get it

while others allow their prejudice to overwhelm them, undermining their cause and merely displaying the lies they keep telling themselves about how the world is in the unrealistic place they imagine themselves deserving: 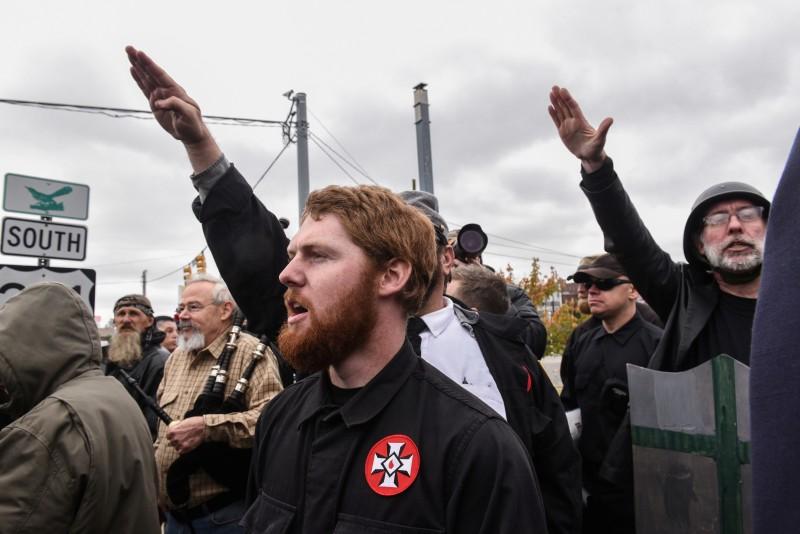 really aren’t all the different from

They shout the same stupid things.  They have so much in common that it is becoming harder and harder to tell such people apart.  I mean, other than the uniforms

They all look the same, right?  All of them.  Can’t tell ‘um apart.

The crying victim-hood of all sides of this problem is not a solution, but the cause of an even deeper rift between people.  Self-victimization is not a protest movement.  It does not achieve any positive goals.  All it does is inspire more hatred.  People walk around with self-righteous messages plastered all over themselves:

Intolerance has transformed drastically in the age of social media.  Now it is so easy to express your mostly deeply rooted prejudices with no actual consequence.

And so “the more things change, the more they stay the same,” as some tired old bigot once said to justify their continuing hatred.  Perhaps the following clever wit has the “final solution” (an apt phrase, unfortunately, to this dilemma of petty foolishness and deflective self-hatred.)  I am clearly a pure and absolute free speech proponent (the first amendment is first for good reason.  Every other right–even the numerous misinterpretations of them, are a product of the freedom of independent thought), but