I will start with an admission: I am an asshole.  No, this is not some self-deprecating statement, attempting to give you a smug insight into how I know what I’m about to talk about.  No.  No.  The vast bulk of you do not know me.  I’m an asshole.  I know it.  People have told me this.  I believe them.  I suppose I knew it even before they did.

The one thing that I have going for me (at least in this context) is that I am a brutally honest person.  In many ways this is why I have been called an asshole in the past.  I state bitter truths.  I offend people and do not really care.  Truth is more important to me, personally, than any social norm or polite delicacy.  This is just one of the signs to consider if you wonder whether you, too, are an asshole.

But I do not want to talk about myself.  By way of introduction I suppose this was appropriate, but this week’s theme of social commentary has far less to do with specific individuality than with mass crazes and societal norms that have transformed a once suppressed, albeit polite, culture into this rude, selfish shitshow we live within today.

Who do you relate to, being privately honest?  Which one of these character types (many of which are nearly interchangeable) comes the closest to defining yourself?  And I am not interested in whatever denial you choose to offer to such a question, the “no, I’m a good person” bullshit, or the refusal to consider yourself anything other than decent.  All of us are assholes in some way or another, even if we do not realize it.  Here, I’ll give a self-assessment within these twelve limited categories:

Personally I am 1, 3, 6, 7 and 9.  Number 3 is probably the best definition, because I have learned how to relate to people in person to get whatever it is that I want and need from them in the moment (my profession, writer, leads me to use every experience and everything that I do as justification to myself as merely another part of my ‘work’).  And yet I am arrogant and selfish and cruel, and I so desperately want your attention that I title some of these pieces with names like “The Tell-Tale Signs That You Are An Asshole.”  It is all a reflexive endeavor, something we assholes spit out onto everybody else because we recognize flaws within our nervous yet beloved selves.

These are the sorts of responses so-called non-assholes smugly offer to people they cannot tolerate.  But this is of course the checklist of an asshole, sitting there and arrogantly judging, imposing an idea of morality with the gravest harshness onto people that they think will annoy them.

What is the difference between this image and the previous one?  What sort of asshole judges assholes through the lens of an asshole?

Yes, this is certainly true.  Nobody likes an asshole.  But what if . . . what if we are willing to admit to ourselves that we, too are assholes and you refuse to hate yourself?  Does that not unravel this whole conundrum, painting certain malicious instincts as positive, regardless of how much you might damage the world?

Isn’t it all about perception?  And not even self-perception, but the idea that you actually understand people’s motives.  I will brag about myself one more time (the constant refrain of a true asshole–can I have an amen, fellow assholes?)  Perhaps my greatest talent (and I will pretend that I have many while this might actually be my only one) is to identify and understand the motives of other people.  I read other people, and pretty accurately much to my terminal chagrin.  I seek to uncover why people act as they do, why they believe what they do, and how they came to accept whatever delusion consumes their lives.  I am a pretty good interviewer, a far better journalist than I ever imagined being, and all of it comes from a non-judgmental acceptance and understanding of why people become the sort of people they do.  We can argue about whether I know what I’m talking about (as those refusing to accept their innate assholishness will undoubtedly do), but such an angry self-defense can only undermine the argument.  This sort of circular argumentation is what can bring out the true self, that damaged, angry person all of us are frequently capable of being, those broiling cliches of intolerance that we otherwise condemn in everyday life, and yet now such behavior becomes the self-justifying persona used to defend yourself against some asshole trying to put you down.

We all admit that nobody’s perfect (except ourselves when we choose to judge the rest of the world), and this quality is what makes us all human, what makes us mostly moral, decent people.  I’m an asshole too, we sometimes have to tell ourselves if we are willing to admit that all of us are more or less the same.  That we are equal.  That all of us count for something.  Otherwise

and there is no returning from such confusion, from such gutter misanthropy.  Just remember 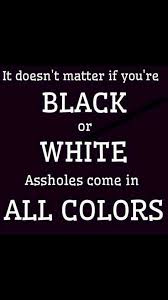 It is wrong to pretend that this statement isn’t true.  I remember when I was teaching high school and the subject would inevitably turn to race.  It always did, some kids trying to assert their presumed superiority while others invented excuses for why they couldn’t complete their classwork.  And I asked them, “Which people, of which race, do you personally have the most trouble with?  Is it from a different race, or those of your own?”  This was answered with silence and then a growing swish of nodding heads.  Sure, some asshole would target another group, perhaps a victim of some brutal form of racism, but the reality still remained that he hated that asshole that lived up the street more than any outlier of a different background that they likely had very little to do with.  Unless, of course, the asshole in question just happened to be of another race, but that is merely humanity.

As true as such a sentiment might be, who wrote this?  What sort of asshole wants to pretend that they know what another person wants, what they are attracted to, or how they believe they deserve to be treated.  What sort of asshole believes that this is how you steal a mate from another, and that this is a moral approach?  It is this sort of wishy-washy bullshit that gives the idea of decency its smug self-righteousness. 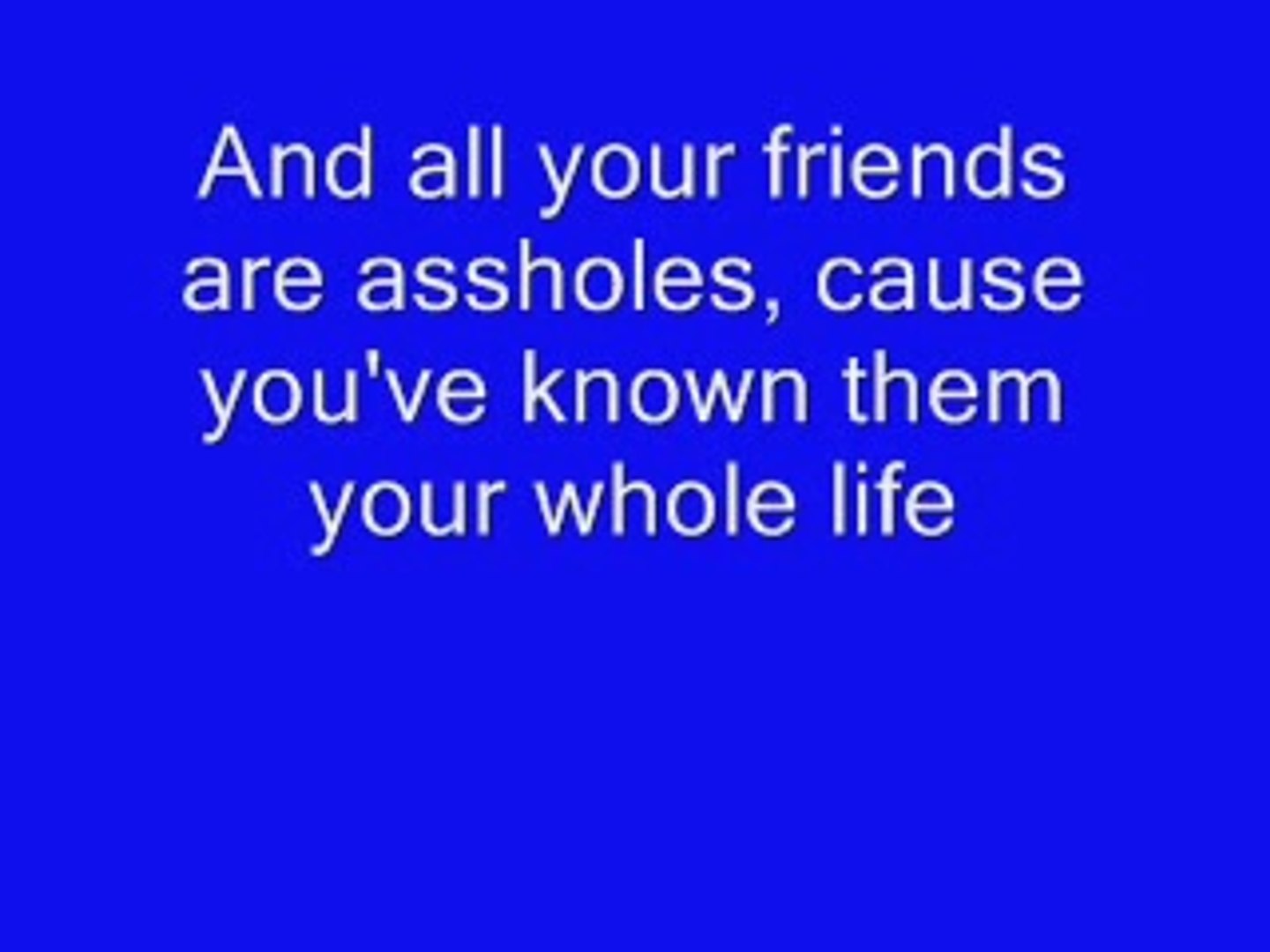 How many people will deny this statement and viciously defend their personalities by attacking the person who makes such a claim?  And sure, sure, whomever wrote this is unquestionably an asshole.  But getting angry about it only proves it to be true.

We are all so smug

And as for the last one

And yet it’s becoming increasingly hopeless, isn’t it?  Looking at the future, looking at youth culture and our own children (remember, every older generation has always seen their increasingly distant youth as the final nail in the coffin of civilization), how can we see anything other than assholes everywhere?  This is why people get so angry, so bitter, so nasty as they grow older.  This is why old men shake their fists at kids barreling across their lawn and why old women shake their heads in disgust over what the world is coming to.  It is because they’re assholes, sure.  But it’s because all of us are assholes too.