The answer, to start with, is no.  No, I don’t think Trump is stupid.  This does not mean that he isn’t a fool.  This should have long since gone without saying, and yet the deliberative controversy over the man’s qualifications for leadership for some reason are still open to debate.  Why?  I just wonder, hearing the cries and catcalls of Trump supporters proclaiming him the greatest, and Trump himself declaring that “No President in American history as done as much as me in two years,” could you explain this?  What has Trump actually done as President beyond disrupted society?  I still await hearing a single beneficial accomplishment.  Why does anyone actually support him?  The fact that people do, whether sincerely or manipulated, doesn’t this return to the initial question?  Doesn’t it prove some darkly cunning sort of intellect?

Donald Trump is not a conservative, no matter how much many of his followers like to claim.  They themselves aren’t conservative either, at least not in the traditional sense, but descending into such semantic games does no one any good, and so I will try to explain this statement.

“Conservatism” is about saving things, about protecting them in a literal and not ideological sense.  It has less to do with imposed ideas on morality than with protecting the economy, the state, the nation, the world, the Constitution, and, yes, the environment.  When did this term get hijacked by by religious fundamentalists and purely greedy scum, thinking in terms of personal beliefs and gains and not for the benefit of all?  Traditional conservatism is not supposed to be about me me me, and whatever prideful justifications people employ to explain away their gains to the detriment of all others.  When the young climate activist Greta Thunburg (who I do not believe is being used as a prop by some sinister environmental consortium, but who is sincere and quite effective, regardless of who elevated her to a position of leadership)

condemns the members of the UN: “We are in the beginning of a mass extinction, and all you can talk about is the money and fairy tales of eternal economic growth.” it is very easy to dismiss these words as the ranting of a spoiled, angry child.  It is easy because that allows us to ignore what she is saying.  And even if the estimates Greta quotes, backed up by intensive scientific studies, are slightly off, it does not change the fact that the fundamental point behind these words is absolutely true.  “Money is all that matters,” climate deniers seem more interested in stating beyond quoting the handful of industry paid scientists who might support their dubious contrary claims.  Certainly President Trump believes this, otherwise the cancellation of regulations designed to protect our habitable environment would not be a controversial issue.  There would be no question that such regulations should be in place.  That would be the conservative thing to do.

But Trump’s “conservatism” is a different sort of monster altogether.  His vindictively destructive approach to the world is not just the delusion that nothing ever really changes and that people aren’t important enough to have true impact, but it is, as with everything else, all about him.  He blares bald egotism about his own powers of persuasion and control.  He still somehow believes himself to be the young man who bulldogged his way into his father’s real estate industry, that he is still the profound failure who convinced himself he was a genius, that he is a beloved figure that everyone elevates to the height of deity, and that anyone who believes otherwise is a traitor.  He sees his life in the very real light of rise and fall and rise again, his own life somehow representing how a nation should evolve.  And he somehow thinks that he is in control, not those natural outside forces that are stronger than any of us.

So no, of course Donald Trump isn’t stupid.  He is selfish.  He is a child–and these are not the “liberal talking points” it might feel better to easily write them off as.  In the past people have said these verbatim words to be–“liberal talking point!”–like they were reading from a script of prepared dismissive responses to something not worth considering. 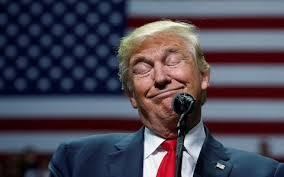 This is a mere handful of images of faces the man has made–in public, in front of important crowds or TV cameras, saying and performing actions that most of us would punish our children for, and yet somehow he has convinced a large swath of people that this is just what the nation needs.

With the impeachment hearing looming and with the endless string of revelations bound to come out, the pattern emerging like the endless plot twists of an overdone melodrama, the one thing we have to acknowledge is, regardless of your interpretation–horror or comedy, tragedy or heroic tale–Donald Trump is certainly not boring.  He clearly understands entertainment, or at least how to constantly get your attention (while reveling in the cynical understanding that most of us merely want to be distracted from our personal struggles) .  He is the star of the most successful 24-hour TV show of all time, known and talked about by everyone.  We’ve all watched it, compelled at one time or another.  We have shouted at the TV, praise and ire no matter which side you find yourself straddling upon.  Even those of us who are so disgusted that we refuse to watch the show anymore are no different than a dedicated fan disappointed or offended by a cast change or the induced doldrums of the essential sameness of the story.  Sometimes we still buy the merchandise or go to the fan conventions, if only to shake our heads in disgust.  Certainly we post our criticisms online (almost constantly) for the whole world to see.  Some of the fans and critics even convince themselves that the star of the show might read their reviews, and maybe even respond.  This is the self-important world we live in.

Again I ask: what has Donald Trump actually accomplished, and not just as President?  I mean ever, in his whole life?  What?  And if your answer is “Well, he sure has made a lot of money,” then you have proven my point.