Instead of the transparently obvious suggestions toward the left that they are traitors (a rarely factual statement used more as deflections from our most low, selfish and basic instincts, instead let’s challenge the right, blaring their ‘pro-Americanism’ on bumper stickers and smug, angry intolerance over anyone they believe might think differently from them. (Of course plenty of ideas coming from the liberal side are treasonous, but they are easily dismissed as pipe dreams devised while passing the bong around Cody or Dakota’s college dorm).  It is the radically declared patriotism of the right that needs some attention.

Again, I do not wish to challenge the left in this piece, but it is important to state that there is plenty of condescending elitism in their own worldview disagreements, but theirs are mostly philosophically academic and thus easily ignored.  On the right their treason hits us where we actually live.

The  United States of America.  A quaint title from a lost past, our nation’s history constantly re-imagined and reinterpreted like some latter day rephrasing of a bible set to justify modern ends.  But we are not ‘united,’ and haven’t been for a very long time, the eleven year interval after the Civil War and prior to the dawn of Reconstruction being the closest we have ever come since the days before Washington.

I want you to read a few quotes before we dive into analysis, and see if you are aware of the direction our nation’s collapse is going:

“The Electoral College prevent(s) a few states from taking control of our country. I do not wish our country to be ruled by TX, CA, NY & FL.”

“Better being ruled by CA and NY!  We ended up with crap like Trump and George W. Because of TX and FL.  Every vote should count! There are more sane than insane people in this country! That’s why Gore and Hillary won the popular vote!”

“I agree that “every vote should count,” so why would I support a scheme that overrides my vote and lets voters in other states elect the President?”

“You could’ve come right out and said you don’t want liberals to win. Now you know how my liberal vote counts in Republican Indiana. ”

“. . . if we take away the Electoral College then many areas of this country will not have a real voice. Not everyone in this country agree on beliefs, morals, religion, finance, immigration, health insurance etc etc. Diversity is what makes our country incredible. If we only listen to the votes in our major cities then we will miss a lot!!”

“The Left is pushing us toward chaos.”

“. . . just open the national election to California and New York and don’t waste your time with the 48 other states. Maybe each county in every state should get one electoral vote and if you remember what the map looked like when it was colored with Red and Blue counties, you see what would have been the case in 2016. Even New York and California had a lot of red. And furthermore, no one in the media or the Clinton camp including Hillary herself cared about the electoral college when it was October of 2016 and she was ahead in the polls. And then to add to it, Hillary expressed such shock when Trump said he may not accept the results and then who was it that didn’t accept the results?”

” It must be hard to know that you can’t win without cheating.”

These are just a handful of the comments either defending or condemning the electoral college, ultimately an antiquated system of Democracy (or for those who wish to correct me, of a Constitutional Republic).  Because such a system does not actually show the truest representation of a united nation’s views.  Were the place united then voting would be the popularity contest it was meant as, not some regional mosh of angry voices shrieking “what about me?”  And I am sorry, but a state with 800,000 people versus one with 35,000,000 should not have the same impact on the nation.  Sure, they vote statewide for individuals running their internal structure, and perhaps one of their bold leaders will emerge to become a major voice of representation on the national stage, thus circulating the suppressed views of a distant minority.  But this does not change the fact that the majority should rule, regardless of how stupid the majority often is.  The more people supporting a cause or action should be the one’s who have the final say.  Thinking otherwise is kind of like flipping the board of a game over because you are losing and screaming that it isn’t fair.

And such self-declared patriots promote themselves

Yes, these folks claim to be aggressively patriotic, daring anyone to stand against them with their guns and glazed eye devotion to an idea they seem to hardly understand.  After all 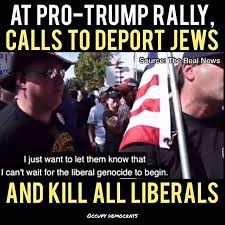 Is this the sign of a ‘united’ nation?  Such patriotic blather, the “America First” nonsense is not truly about supporting the idea of the nation, about the freedom inspired by those fine, increasingly ancient words of the Declaration of Independence.  No, now it really is ‘me first,’ and let the nation follow.  It is my land and to hell with anyone who doesn’t see the truth of my singular ideology.  They are the

The left, of course, usually attempts to intellectualize their condemnation of their rivals, arrogantly assuming whomever they are targeting is too stupid to understand what they are saying

Of course such a tactic is pointless, whomever it is they wish to attack not interested in what is being said, most of them not too stupid, but too disinterested to bother.  In the end it merely becomes a cheap joke for the like-minded.  At least on the right they know how to outrage those they believe to be traitors

Compare this to the flaccid liberal attacks:

Sure, the point may even be valid, but it does not catch you attention like

This divide between Americans is more cause for concern than who it is in the White House at any given time or which party runs Congress.  It even surpasses the make up of the Supreme Court (although their influence, ultimately, is far more profound on the fate of the nation than the small-minded partisan bickering that covers the every day movements clashing into nothingness on the public stage), and is what we should be most concerned about.  Remember what Abraham Lincoln said while he was campaigning for President?

Of course this statement did not originate with him

And yet for some reason every drifting side declares itself the truly moral, the singularly patriotic.  There can be no patriotism, no love of any country, if you believe that your way is the only way and all rivals are enemies.  It is simply paranoia, intolerance–it is outright selfish hatred.

Like the world in this globalist internet age, where communication is the push of a button, and every stupid thing you may have ever sent is saved forever, we too have gotten much smaller.  We hide ourselves away, living behind these screens and ranting to no one, hoping that someone in a passing moment might notice our screed.  Often the only response we achieve are negatives, disagreements, trapped there in your lonely room, giving you the proof you need about point you wished to make.  We are all enemies, we tell ourselves.  There is no purity outside of my illusory realm.

Stop calling this nation the United States.  We are with increasingly rapidity severing ourselves from each other, all the warnings of the founding fathers about the delicacy of a country coming true at once.

And yet the battle continues in a place that was never meant for warfare.  Tune in tomorrow for even more divisive action . . .

*(This is a separate remark for any long time readers: starting tomorrow, 10/24/19, I will be out of town on assignment until 10/29, and so will likely be unable to add anything to this site.  I will be attending the Third Annual American Horrors film festival in Lake Geneva, Wisconsin, which I am sure I have mentioned recently, writing a commentary that will appear shortly thereafter on a few online horror magazine sites.  It will not be reprinted here because, well, I’m getting paid for it.  I will let you know where and when once I return, and then we’ll get back to the collapse of politics and society itself.)