Before we get started we should remember something: 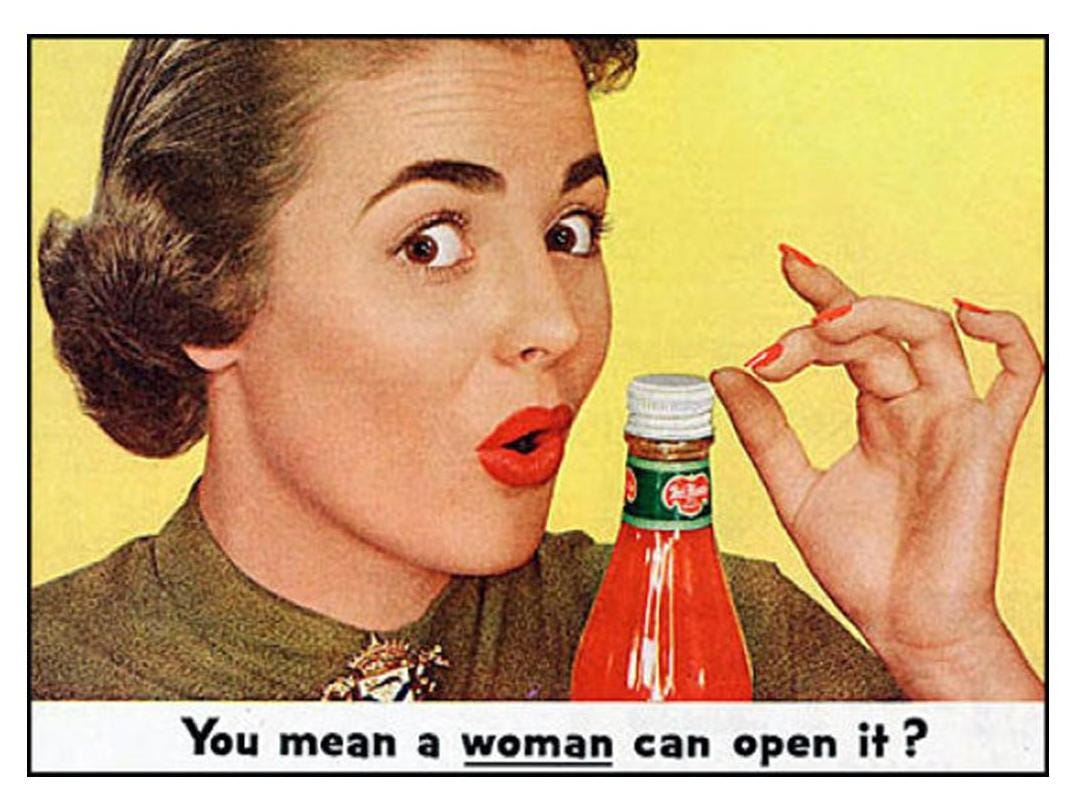 Now we can understand the satire of the second selection of ads (I could not find a direct parody of every one, but I suppose that has more to do with the sheer number of sexist ads from the past), although I wonder what is the point?  Does it really reflect how times have changed, at least a little?  Is it trying to put the past in its place?  Or is this merely a new sort of sexism, re-imagined not as a cure for the social wrongs of the past, but as a smug–oh yeah?  I can be just as much of a scumbag as you!

I do not intend to go off on one of those pathetic examples of angry men (or angry white people) making ridiculous statements like “reverse sexism” (or “reverse racism”) are somehow worse than the ill suffering of women throughout most of time.  Men have certainly earned much of their scorn, treating women like chattel, as incubation chambers for their hopefully male offspring.  And even today the way in which so many men treat women is hardly any different than the slap on the ass, “lookin’ good, honey,” catcall whistling intrusions.  These ads are recent:

The last one is for skin cream.  These habits, I suppose, are very hard to break.

But does this give women, today, the right to treat men like shit?  Does it make sense that a black person can be racist with no consequences?  Is this the new reality?  Is this the evolution of bigotry?

Now men today, of course, are frequently a bunch of whiny little pussies, worthy of no respect.  And while some of them claim (and some women too) that

the bored look on her face, the sheer disappointment, as well as the movement slogans representing something far more important than the suggestions at hand, the fact remains that many women, deep down, still desire a man to fulfill certain masculine stereotypes.  And yet the nervous, frustrated, resentful new generation of men is more about

It is groups of angry men, uncertain how they are supposed to behave towards women, that creates this self-loathing sense of inferiority.  “I don’t know what I’m allowed to say any longer!” the man shrieks like the ancient stereotype of a woman unsure how to please her man

Somehow the man is trying to convince himself that the crude behaviors of the past are still acceptable and that the fact he is told otherwise is oppression.  The last image, from above, “Feminism is Sexism,” does, however, ask a valid question, at least in the metamorphosis over the years.  Have self-declared feminists become sexist–every bit as sexist as those they condemn?

One of the most frequent tactics that people employ to fight against prejudice is equal and opposite prejudice, more imitating the same loutish behavior than seeking to change the world into a better place.  People get angry so easily and are outraged over some things that shouldn’t really bother you.  I mean, want to be offended by something truly awful?  Here:

I mean, how many of us are more interested in the conversation about the mechanics and durability of public transit versus the expensive new things we put on our feet?  I mean sure, the wording may be a little awkward, and the girl asking about shoes comes off as pretty dumb, but check out some of the reactions to this ad:

One clever wit posted this, instead, really the only worthwhile reaction to something as vapid as the Metro’s campaign:

“What are the best shoes for walking to work after the Red Line breaks down?”

But the outrage, the overheated offense that people take to either stupidity or perhaps failed comedy is a different sort of mirror imaged problem.

The key word within these advertisements for political action is not ‘hate.’  No, it’s ‘speech.’  No matter how objectionable you may find something somebody else says, or how targeted you feel or even in fact are, there is something else to keep in mind:

In other words, free speech is far more important to a society than countering hurt feelings.  One cannot outlaw the stupid things that all of us at one time or another have to say.  And despite the fact that so many awful things continue to be justified by the words of horrible people–treating a woman like an object, calling people names or offensive terms, telling a man just how worthless they might in fact truly be–all of this, ALL OF IT!–is within our rights.

I am not defending anyone or anything.  Those ads that started this piece are horrible, although admit to yourselves–you women especially–that there is a sort of nostalgic hilarity to them.  Looking at the urgently serious cries against the ‘crime’ of ‘hate speech’ (one of them even called it ‘illegal’), perhaps this is finally where we need to focus.  None of this is about equality.  It is about a humorless outlook on the world.  It is an equality of limited freedom, of demands that people fall in line.  It is about turning the whole world into a so-called ‘safe space’ where in fact that inclusive reality becomes a new form of terror, like some product out the the increasingly dire cold war dystopian fantasies that once could make us shudder.  Today it seems that some folks, regardless ultimately of their political sides, see such horror stories as suggestions on how to make the world work.

Here are a few quotes from George Orwell:

Now these statements can no doubt be interpreted in various ways, used to justify yourself and your views, or to simply condemn those you disagree with.  But it does not eliminate your own prejudice.  Just remember, after all, hating people who hate others is still bigotry.  Want true equality?  Gender and racial equality?  Acceptance of others for who they are?

Isn’t this, after all, the essence of our corrupt human nature?