Let’s stop kidding ourselves, wrapped, as we are, within our own narrow visions of the world.  The impeachment of Donald Trump was clearly a partisan undertaking.  Same with Bill Clinton.  Andrew Johnson was so reviled by everyone that his own party kept their mouths shut while the opposition ranted, cheated and fabricated in order to push the terrible man out.  Richard Nixon, for his part, retired prior to his inevitable ousting, the only impeachment that would have actually been bipartisan.

But there is another thing to consider about our nation’s three standing impeachments.  Beyond party, there remains the question of character.  Yes, all three of these men did (and continue to do with the present leader) some terrible, terrible things, violating their oaths and seeming to not care about the laws as they are written and meant to be followed.  And it is character, above all else, that grinds into the fabric of such political action.

He was a miserable man, a political appointment by Lincoln on the lone merit of his Southern heritage.  He offered no positive slant, no worthwhile knowledge or ideas about the nation.  He was a barely literate asshole whom no one ever loved.  Although, of course, he had his partisans, those who declared Johnson was the only man who could lead the nation to reconciliation after the devastation of the Civil War.

Johnson had no real interest in the recently freed slaves.  In fact, in his mind, they were all still slaves.  And when Congress overstepped his sour ideology, imposing the then celebrated period of ‘Reconstruction,’ Johnson did everything he could to undermine it.  That handful of newly elected black congressmen were parodied and caricatured, leading to images such as this:

Those promoted ideas were encapsulated in this widely circulated image by people who did not necessarily like President Johnson.  But they supported him to the ends of the earth.  Misguided as they were (and wrong, ultimately), they for some reason believed that Johnson had their best interests at heart.  And when Johnson was finally tricked by the imposition of new laws that suddenly made his previous actions a violation of the Constitution, the opposition had him exactly where they wanted, a contentious trial with an inevitable outcome.  And yet, of course, there were the narrow partisans who refused to accept the facts, denied a truth that was plain and hovering in the air before them.  They refused to accept the findings, or the reality, and closed their eyes to the rift that refused to heal after the war.  People were bloody and violent, and radical terrorist organizations such as the Ku Klux Klan were suddenly invoked and allowed to flourish.  Citizens began losing faith in one another–certainly in the government, and all because Johnson was an unlovable creep that no one, really, wanted as their president.

Bill Clinton is a different sort of character:

A profoundly charming man (probably his greatest talent), people who loathed him then met him face to face often went away still hating his politics, but with a slightly better opinion of him.  He could make them smile.

But Bill Clinton was also a sleazebag–let’s admit this, pro-Clinton partisans.  He was an oily, predatory creature–all his life, apparently–and he used his power both to seduce people, or threaten them if they didn’t toe the line.  And while his presidency, ultimately, remains in historical consideration a pretty successful one, let us not forget the numerous incidents of hideous domestic violence that the actions his administration inspired:

There are plenty more too.  And while we cannot blame Bill Clinton himself for these irrational and radical attacks, the polarization of partisan hatred, sometimes consciously inflamed by the otherwise moderate president, continued to create an increasingly divisive society.  And when the nation, after the first few events, decided to elect a counter to Clinton’s perceived moral lapses, the hard right wing began getting a voice in American government again.  And this voice was vile and filled with unconscionable hatred for vague ideas and misunderstood perceptions that were easily filled in and narrowed by secret-meeting-talking-points and insincere religious fundamentalism.  The new Republican house majority set about trying to find a way to get a man they considered a false President out of office until finally, after exhaustive research into the numerous questionable transactions anyone successful enough to rise to the highest office in the land is unquestionably guilty of, they latched onto something petty and went ahead desperately trying to fume over transgressions about half of the majority were also guilty of, and they tried to shame the President.  Of course Clinton knew how to work his crowd and even convinced many abused women to support him in favor of the grim, creaky old misogynists on the other side of the aisle.  It became a purely partisan formality, the on display flaws of character in the President eventually leading the way to impeachment.

Donald Trump, while every bit as much under a partisan attack, still creates a different picture in a world that is somehow even more partisan than the sorrow of the Clinton years, the shock of the Bush, Jr. years, and the desperate, racist loathing of the Obama years.  No, Donald Trump, a shallow, empty showman only interested in money, is terrific at exploiting the disappointment and rage that people of every generation always feel and frequently have hotly buried inside.  Trump encourages them to unburden their rage: 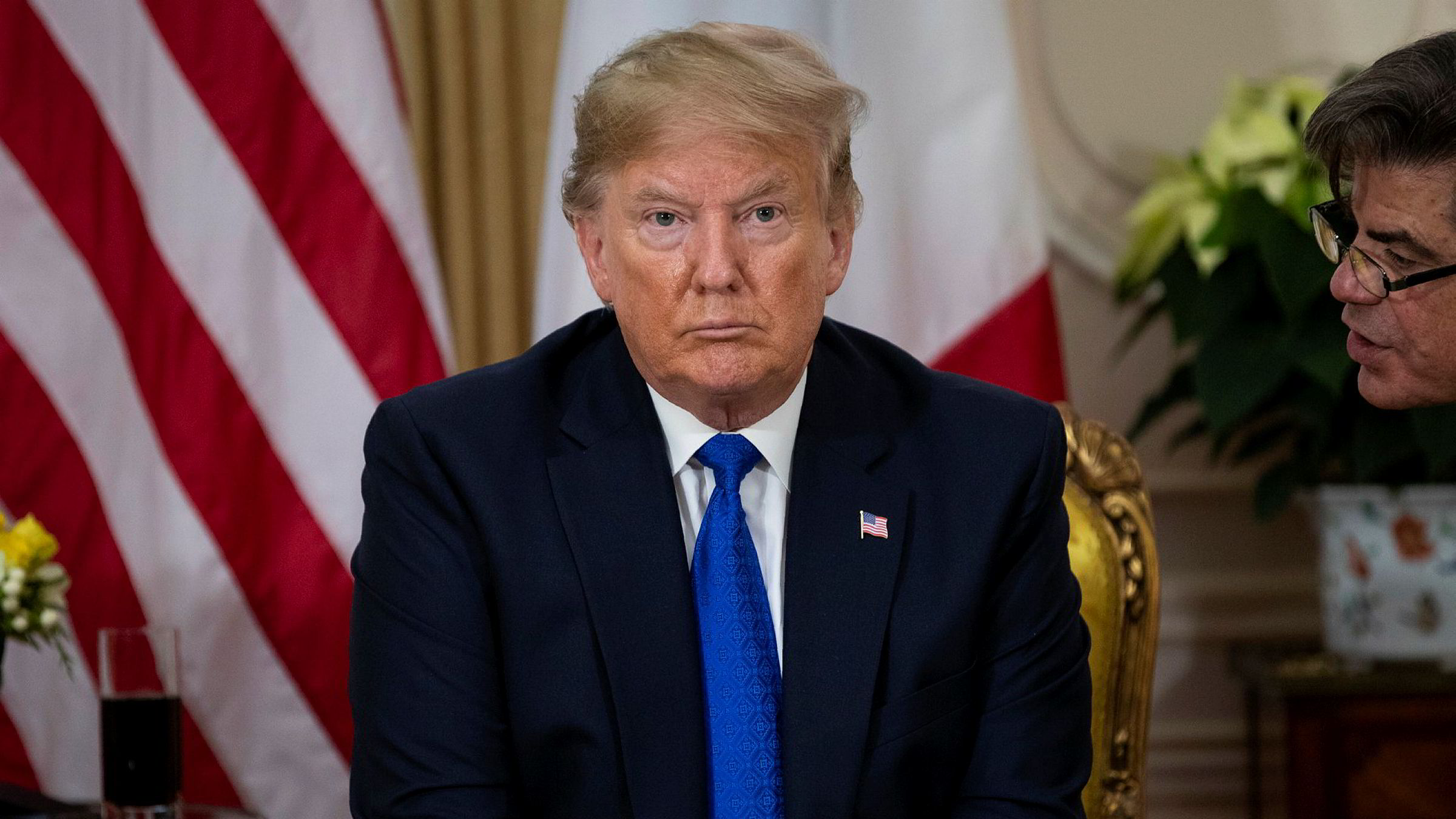 This is the divide in America under the presidency of Donald Trump.  Is it his fault?  Partially.  Here are a few quotes from the man:

This is a very slight sample of President Trump’s smug, inspiring statements that tell his followers that it is okay to invent your own truth(s), it is okay to hate–and even attack–people you do not agree with.  He glories in threats, usually empty because deep down the man is a coward, masking himself behind bluster, arrogance and a mercilessly thin skin that causes him to be offended by even the slightest criticism in his handling of anything.  One can imagine how terrible it must be to work for him, going all the way back to his numerous rises and falls in business.  Who was blamed for his own mistakes?  Who gets told they are stupid when all the stupidity in question is committed by him?  And of course this isn’t all the time.  Donald Trump has been very successful in life–he must know something!

But his impeachment is frankly a terrifying thing to behold.  Not since before the Civil War has the nation been so divided along partisan lines.  Back then the righteous anti-slavery congressman Charles Sumner was hit in the head on the house floor by the outraged pro-slavery advocate Preston Brooks:

Notice all the people smiling and laughing, or simply ignoring the gruesome event in this image.  And considering how angry both sides seem to be over this situation that keeps being called ‘unprecedented’ (clearly it is not)–look at Doug Collins seething with rage whenever the President’s actual crimes are brought up (and quit saying he didn’t commit any–of course he did and you know it!  Partisanship is your only line of defense, which, any longer, is based exclusively in the realm of hating a different opinion from your own)–considering how angry everybody is what sort of face might our nation’s collapse take this time, when regional considerations no longer exist?

Impeachment is always about character, about the personality of whomever is in office, and the distaste people feel when considering the fact that this person was somehow elected leader of their nation.  But when someone tries the argument that “this is all about hating the man,” or “You’re trying to undermine the will of the people just because you don’t like how the election turned out,” this is hardly the first time such statements have been made, directed at either side.  And so the righteous hypocrisy on every side is what is really to blame, the cruel partisanship that consumes Democratic politics.  To repeat, and from a very different perspective than someone in the house trying to defend the president said, George Washington said it best:

This quote (or at least a few cherry picked lines) was used by a Republican to condemn the Democrats (with some justification) for their attempts to impeach Donald Trump.  But another reading of this quote can easily revert towards the man this Congressman wishes to save, a thoroughly corrupt man who himself can only crow about economic prosperity under his reign.  And while this is a good thing, there is nothing else he can brag about.  He has done nothing other than divide the nation even more with his ‘character.’  And the boasting about money also betrays his only interests, the only thing he truly cares about.  He does not care about people.  He doesn’t care about you, those who support him.  You are like a tissue he can use to blow his nose on, needing you for a moment before throwing you away, never to be thought about again.  Donald Trump does not care about anything.  He believes in nothing.  And this, like all those before, is really why he has been impeached.  Partisanship, a loathsome character.  Perhaps we as citizens should really think about who a person is before we rally around a slogan and elect them to lead us.

1 thought on “Impeachment Has Always Been a Partisan Affair”